Sabres In The Playoffs? No Problem

With 9 games left on the regular season schedule, the Sabres are within reach of a playoff spot. For many people, this simply means “root harder.” For me, it means “start playing with Excel and see how realistic this whole thing looks.” As the season winds down, things will get much more technical and, quite frankly, ugly. (Exhibit A– last year’s playoff math.)

Replace one of the teams currently in top 8. 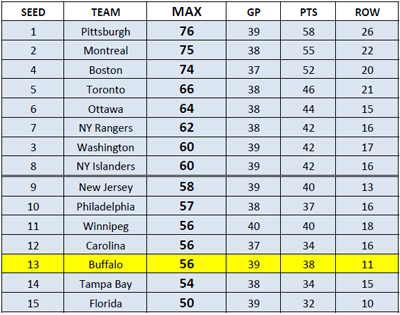 Technically, only uncatchable team is Penguins. They’re already sitting on 58 points and Sabres max out at 56.