The best show ever to air on network television left us far too soon. 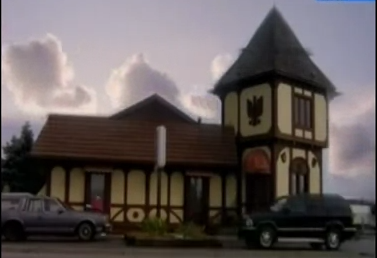 Come Back, Jesse! Buffalo Needs You!

Once, back in the heady days of 1998, there was a network television show set in Buffalo. It was called Jesse, and if you don’t remember it, you missed the high-water mark in the history of this city. Forget the Pan-American Exposition. Forget about Bruce Almighty. Christina Applegate once starred on television as a single mom living in Buffalo, New York. The city hasn’t been the same since she left.

This is the title card, and that’s the Buffalo skyline. I think. Whatever. As we move forward it will become very clear to you that they spent about four hours filming exteriors in Buffalo and then got out of dodge. The opening has some shots of Buffalo in the background as actors dance like quirky late 90s television characters. In its first season, Jesse was the lead-out for Friends on NBC, which explains why it made it a second season at all. I watched the first two episodes on YouTube, and it wasn’t good.

Let me tell you about everything. Theme song go!

The first episode is called “A Side of Chile” (part one, part two) and introduces you to The Gang. Christina Applegate has an ex-husband and a Chilean love interest and works at her dad’s German-themed restaurant.

That’s Jesse and her son flying down Main Street in a Radio Flyer wagon with city hall in the background. The open is a never-ending side scrolling PowerPoint slideshow, which made it difficult for screencapping. I’m sorry. This show happened 15 years ago. Vaclav Varada played for the Sabres back then. Technology has improved, but Jesse will forever be filmed in 1998.

George Dzundza plays John Sr. He’s your classic mostly-racist Archie Bunker-type father figure who happens to use a Buffalo Bills mug for his morning coffee. He doesn’t like the Chilean neighbor, but I think that’s mostly because he’s bewildered by the presence of the only Chilean to ever live within Buffalo city limits. You try living next to a unicorn, buddy.

In the pilot he tries to make a “fuzzy navel” and “pink lady” out of dishwater. He’s gruff, he doesn’t know the capital of Uruguay and he doesn’t give a shit about anything darker than Wonder Bread. America loved him. He didn’t make it to the second season.

Oh, hey, there’s a Bryce Paup jersey being worn like a shawl. Based on the size, I’d say Paup himself donated a game-worn jersey to the production. It’s a miracle that child didn’t drown. Paup, or “Little John,” is that kid from The Santa Clause (all three!) and Dunston Checks In, also known as That Movie Where The Monkey Out-Acts Everyone.

One of Jesse’s brothers, also named John, has taken a voluntary vow of silence. Jr., as he is called, was presumably struck mute by the horrors of the Rob Johnson era of Buffalo Bills football.

Jesse’s other brother, David, is played by David DeLuise. Yes, person with children, that’s the dad from Wizards of Waverly Place. Which airs on Disney Channel. Which also has a show called Jessie on the air right now. No, this is definitely not a coincidence. WAKE UP, SHEEPLE!

This is the building that’s supposed to be the German restaurant. I was going to make a joke about preservationists and making a cardboard replica of it in a vacant lot, but then I was told that’s the Polish Villa. Never been, but hey, never let reality get in the way of things.

But seriously, we should be selling Jesse shirts outside of that place and Lloyd’s tacos in the parking lot. Build a weather-proof bubble around it for protection. Forget about the Trico Building. This city needs to get its priorities in order.

In the second episode, Jesse gets a Goober stuck up her nose while on a movie date. It’s called Goober up the Nose (part one, part two). Those writers, man. Somehow, everyone she knows ends up at the hospital for this crisis. While the hilarity ensues, David reclines in the waiting room reading a Buffalo News as wide as a Mack truck. Thousands of trees died to make that one copy. The world is a different place now.

The credits roll on the second episode as a camera follows the Metro down its long, complicated journey through the streets of Buffalo. This is the best show ever to air on network television. It left us far too soon.