Thanks to Deflategate, it’s a great week to bust out anything and everything that you’ve suspected the Patriots of doing and throw it against the wall. That’s what this writer… 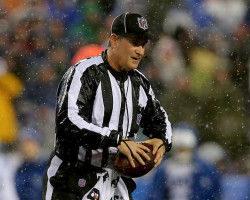 Thanks to Deflategate, it’s a great week to bust out anything and everything that you’ve suspected the Patriots of doing and throw it against the wall. That’s what this writer did at SI.com.

Also predictably, a large number of us NOT in or around Boston find this defensiveness repulsive.

The following is a guest essay from a longtime friend of TB, Todd Morse.

Fool me once…Fool me twice…

When I was in 5th grade, I was taking a science test and had no idea what the answer was to a question. For some reason I felt bold enough to lift the top of my desk, open my science book, and look for an answer. I was cheating.

Mrs. Gavin wasn’t stupid. She saw I was cheating, walked up to my desk, and took me out into the hall. After a stern talking to, I felt bad, but I felt bad before and was able to get over it. There were further repercussions the next day. Despite me missing one question (the question I tried to open my book for), I failed the test, was fined $25,000 and wasn’t allowed to be a kickball captain anymore.

What I didn’t realize at the time, was that the rest of the class considered me a cheater for the rest of the year. Behind my back, they called me Derek Cheater, and I still give them points for tremendous foresight since Derek Jeter wasn’t on the Yankees until eight years later…and my name is Todd.

After learning about my reputation, I was devastated at first. My testosterone levels dropped, causing my balls to deflate, and my confidence was shattered. After some time though, despite knowing that I could study and do what regular kids do, I instead embraced the idea of finding ways to get good grades without breaking the rules, but working around rules. I didn’t have to do this, but it was a lot more fun to outsmart my teachers and prove to my classmates that I could get better grades without cheating, but also without trying.

Personally, I felt empowered, confident, and kept refining my practices for the rest of my time in school through graduation. I stopped cheating according to official student handbook rules, but I stretched the unwritten rules on how to be a standard student and was able to calculate what it would take for me to “earn” high grades while putting in the least amount of effort. As the child of two parents in education, and the younger brother of a brilliant sister (who did the studying and trying really hard thing), I picked up a lot of tricks.

It was great. I had friends who studied for hours, I got better grades without studying, and every comment on every report card said that I wasn’t applying myself enough and that I should try harder. I had no intentions of going to an Ivy League school, and I was getting high enough grades that between my grades, extracurricular activities, and SAT score, I was confident that I could get into all of the colleges I applied to.

And I did, except for my dream school, UNC Chapel Hill. It was the first true setback in my educational career. After sulking for some time, I got over it and made other plans. (Actually, 18 years later, I’m still not completely over it, so I now root for Duke.)

If you’re not bored by now and still reading, my story is an adequate comparison to the New England Patriots. Two weeks ago against the Ravens, the Patriots executed three plays that caused the John Harbaugh (the level-headed Harbaugh) to call the Patriots cheaters.

They didn’t cheat, but they stretched the rulebook using those formations. If the Patriots weren’t sure whether they were cheating, they wouldn’t have asked the referees how to report eligible and ineligible receivers, or given them a heads up about what might happen, prior to the game.

The issue really has nothing to do with the Patriots. It is really about the order of operations teams and referees take in order to make eligible and ineligible receivers clear to the opponent, and then how they can give the opponent time react to it. A player declaring himself as eligible is normal for a game. A player declaring ineligibility is rare. Rare to the point that I don’t think I ever remember it happening.

Still, that isn’t cheating, and it is the referees job to call them on it if they do cheat.

On to the deflated ball thing. I initially wrote this piece before findings came out, but now that they have, I still think it is stupid on all sides. Six days ago I didn’t know anything about the NFL’s balls, and now I know way more than I need to.

The main discussion point is that Brady could hold the ball better if it is deflated, but it seems that it would be much easier for running backs to hold the ball tightly and have a more significant impact on potential fumbles, and for receivers to catch as well. The difference between catching a rock vs a same size bean bag is pretty different. That being said, since that isn’t in any discussion or article I’ve heard or read about fumbles and receptions, maybe not. (Editor’s note: Now it is.)

It might be more worthwhile to look at stats and trends (because some are a bit questionable), but the Colts, who have absolutely no threat in their running game, were challenged by the Pats to beat them using Luck. Using Indianapolis’ balls, the New England defensive backs seemed to have no problem catching two of Luck’s passes. The eyeball test showed that the Colts just weren’t ready. They simply weren’t ready to take the mantle, and the Patriots weren’t ready to hand it over. The Colts shouldn’t use deflated balls as an excuse. They should use the game as a learning experience.

Luck has already shown, even from his time at Stanford, that pressure doesn’t seem to rattle him. New England exposed some significant flaws on both sides of the ball, but having an elite QB like Luck, and playing in a dome, makes Indianapolis an attractive free agent destination. As long as the Colts accept that they weren’t cheated out of a win, they should have no problem re-tooling effectively and being in the same position next year.

The problem with SpyGate is that the Patriots had the talent and the brilliant minds to win without doing something as dumb as tape opponent’s practices.  Yet, for some reason, they chose to do it. Was it worth the risk? Three Super Bowls in four years is a resounding yes. Now, SpyGate is the “gotcha” for those Patriots Super Bowl wins, and people outside of New England keep the fact that the Patriots haven’t won a Super Bowl since getting caught, in their back pocket.

The Patriots seem to do everything within their power to create the illusion of cheating, or semi-cheating, or annoyance, which leads to skepticism and paranoia among their peers, because it seems like the playing field is uneven when it isn’t. Most of what the Patriots do seems to be using calculated, dirty, and unsportsmanlike ways to exploit and win using technicalities. The whole “we followed the rulebook” mantra is old and worn out – at least everywhere outside of Boston.

Winners and losers are determined by what happens in the gray area, not the black and white. Winners have to be comfortable with what they do in the gray area, and the potential cost of being judged by those who live outside the gray.

2007 was the year for the Patriots to prove that they can win without being sleazy or underhanded, and suddenly, one miraculous catch by a no-name receiver ended that chance.

Throughout this season, this team slowly came together and was poised to prove they aren’t corrupt, and suddenly, that chance is once again lost.

This time, that wish is probably forever deflated.