Relievers in baseball get very little attention, unless of course they blow a game down the stretch. The best relievers in the game are rarely heard from, because that means… 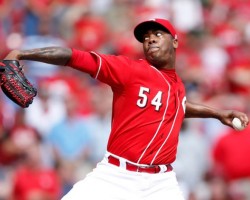 Relievers in baseball get very little attention, unless of course they blow a game down the stretch. The best relievers in the game are rarely heard from, because that means they are doing their job. People in fantasy baseball leagues are looking for those types of guys in order to help in the later rounds. Here is a look at the 5 best relievers going into the 2015 season.

Consistency is the key if you are a closer in baseball. There is nobody in the game more consistent than Kimbrel right now. Unfortunately, people in fantasy baseball leagues are little bit worried about the fact that he is stuck on the Atlanta Braves. They are not going to be very good this year, and he might not have as many opportunities to pick up saves. He is still the top reliever in the game right now despite the team he is on.

At times, Chapman can look like one of the best pitchers in all of baseball. However, he can be a little bit vulnerable at times as well, and that is what keeps him out of the top spot. He is still going to be the reliable closer for the Cincinnati Reds, but he is continuing to work on his secondary pitches and his control to go with his unbelievable fastball.

The Kansas City Royals do not get to the World Series without their outstanding bullpen a year ago. Anchoring the bullpen was one of the best closers in fantasy baseball leagues in Greg Holland. He is young and talented with multiple pitches, and he should be able to put up similar numbers this upcoming season.

St. Louis has been able to be very consistent in baseball thanks to their ability to grow their own talent in the minors. Rosenthal is just one example of a homegrown player, and he could be closing games for them for a while. He has been pretty dominant since breaking out in the postseason a few years ago.

With the New York Yankees, he was always going to be in the shadow of Mariano Rivera. He was unable to handle the pressure taking over as the closer at first, but he did settle in. Now, he’s going to enter the year as the closer for the Chicago White Sox thanks to a $40 million deal.