Coach challenges during a hockey game are like couple arguments during a dinner party. Your fun is destroyed as two people try to figure out who is right, and by… 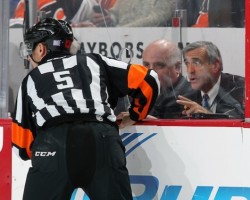 I’d Rather Have Hemorrhoids than Coach Challenges

Coach challenges during a hockey game are like couple arguments during a dinner party. Your fun is destroyed as two people try to figure out who is right, and by the end of it you don’t even care who is right. You just want to stop a bus with your face.

First off, this is not sour grapes because the Sabres didn’t get to tie up their game with the Senators in the big season opener. I honestly don’t care that much. We have our guy and he’s super fun. We have a bunch of super fun guys now. Unfortunately, to make sure that we never have too much fun, the NHL has instituted instant replay coaching challenges. You are the worst, sports. 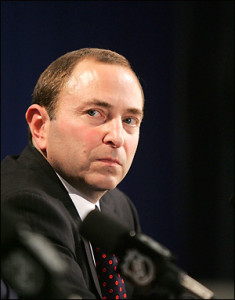 This guy probably breathes on your face while you sleep

I don’t even remember this decision being reached. Did they slip this news in at 5 o’clock on a Friday at some point during the offseason? Were we allowed to vote of this? Did Gary Bettman sneak into our homes and breathe on our faces as we slept? I’m not putting anything past a diabolical sports league that would allow for coach challenges to be a thing.

Coach challenges are worse than boring; they’re lazy. Hockey players are supposed to stay onsides. It’s their job. If a linesman sees that a player is not onside, the linesman should blow the whistle. It’s his job. If the linesman screws up and an offside player gains an advantage by being offside, the defenseman should get over it and neutralize the offside player. It’s his job. We all have jobs. We should do them. Do your job, NHL.

Some would argue that coach challenges put things right and that the most important thing is that the correct call is made on every play. I would argue to those people that, if making sure things were correct was fun, IRS audits would be shown on large screens in bars and kids would collect and trade accountant cards.

I do not care who is right. I do not care if mistakes are made during the course of a hockey game. I just want to watch guys score and hit each other. If the guys wearing certain sweaters win, I’m happier than when they lose.

If the NHL came out today and said that the new coach challenge option makes it possible for the Sabres to be declared the winner of Game 6 of the 1999 Stanley Cup Finals, I still would like for this change to never have existed. Coach challenges are offensive. They are not sports.

Coach challenges might be bearable if they were done properly. Why do they take six minutes to gather in a group and skate over to the boards to watch the play again on a tiny screen? There’s a 4,000-ft screen hanging over your head! Have the kid up in the press box rewind the tape and then nod your head yes or no! It should take 11 seconds!  Nothing in this day and age should take more than 11 seconds!

Coach challenges are the equivalent of two spoiled brats arguing on a playground over whether or not fingers touching a shirt constitute being “it.” No one cares about those stupid, spoiled brats. We just want to play tag. Be better at tag and go get’em next time. Or, run home and get mom so she can challenge the decision.