I’m not even going to mention No Goal in 1999. I blame him and will always associate Gary Bettman with No Goal, but I’m not going to make it the… 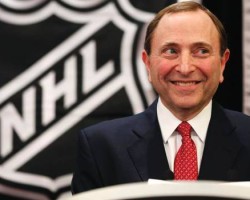 I’m not even going to mention No Goal in 1999. I blame him and will always associate Gary Bettman with No Goal, but I’m not going to make it the crux of my rant. It’s not even the main reason why my stomach hurt upon finding out that the NHL is giving their commissioner a 7-year contract extension. The real reason I hate this announcement so much is because it’s stupid, and I hate stupid.

Who wanted this to happen? The players who have gone through three work stoppages in his tenure? The fans who have suffered through a disgusting facsimile of their favorite sport for most of Bettman’s 23-year tenure? Glowing puck enthusiasts? Third-jersey fanatics?

Maybe the owners like over-expansion. Maybe the players like being bullied into skipping All Star games because their commissioner is too short-sighted to see that letting the internet pick something will always end badly. Maybe a couple of people in Atlanta remember having an NHL and miss it.

I have never met one of those people. I have only met people who like goal scoring and fun. I’m sure there are people out there who like watching talented men play hockey like they’re handcuffed to a radiator. I’m willing to allow that there could be a small faction of the population who write letters to the league office hoping for larger goalie equipment because they’re sick of red lights constantly stinging their eyes during games. I guess it’s possible. 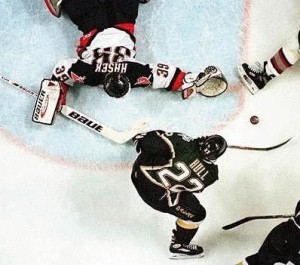 I enjoy good hockey. I like my divisions to be named after important dead guys. I prefer my home team in white. Gary Bettman has absolutely no idea who his fan base is. He’s like a guy driving around in an ice cream truck trying to sell boxes of raisins.

Finding out I have to watch seven more years of hockey controlled by Gary Bettman makes me want to not watch hockey. He’s never given me a glimmer of hope that he’ll make the sport better. It’s depressing and maddening. Why not let any other person on the face of the earth be commissioner? Like, for instance, someone who wouldn’t let a championship get decided by an illegal goal? (Sorry, I tried.)

Maybe things will be fine. Maybe the NHL will allow players to literally figure four leg lock other players to slow them down in the offensive zone. Maybe Bettman will add 20 minutes to each video replay challenge. Maybe he’ll make it so fans can just vote for the outcome of games online. Maybe one of the games will be so boring that I’ll fall asleep for seven years. Fingers crossed.