A kiss to Jason Kidd 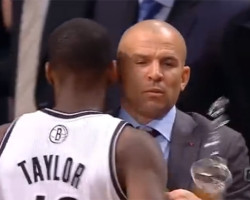 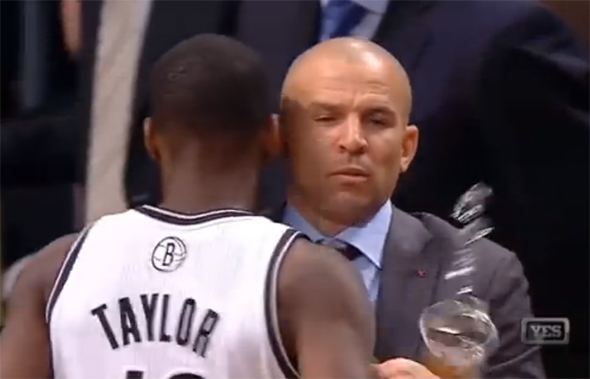 Jason Kidd, the NBA’s Brooklyn Nets’ “brilliant” rookie coach has been fined $50,000 for his ridiculous sideline antics last week. Out of timeouts, Kidd Genius had a Nets player “accidently” bump into him on the sidelines while he was holding a drink, ostensibly to cause a mess and get a timeout to strategize at the end of the game. Well, his acting skills were poor, his expression of surprise was about as convincing as a Kevin Costner soliloquy, a Keanu Reeves script reading or a Nick Saban pledge. The commissioner and his office weren’t too convinced either.

Reichsmarshall Stern acted immediately to stem this in the bud, in his last year of stewardship, the all-seeing oracle Stern does not want a plethora of farcical incidents on the hardwood to color his legacy– the ineptitude of the Eastern Conference this year has already done that.

Still we can’t blame him for dealing harshly with Mr. Kidd.

This annoying self-promoter has had it coming for quite awhile, back when he was a player with the New Jersey Nets,Jason Kidd and his very attractive then wife Joumanna, were quite a sight– constantly grandstanding at every opportunity with their child at courtside and post game press conferences. At the time, their son “TJ” seemed to look a bit like the Great Gazoo.

That’s not a criticism– just an observation! He will (or likely has) probably grown into that extremely large cranium, and he may go on to cure cancer and be the nicest person in the world.

But let’s just say that Jason Kidd’s best genetic feature is his wallet. His wife looks like a model/celebrity and part of their very public act was to help her in securing/advancing a career in acting/broadcasting (much like the unctuous groveling for a TV job Tiki Barber constantly engaged in during his last few years in football, which turned out to be a much longer slog than his tenure on NBC Sunday Night Football when the audiences responded indifferently to his distinct lack of dynamism and negatively to his tedious Cheshire Cat smiling, vacuous oratory and obvious lack of qualifications.)

A lot of fans resent such obvious ostentatious showboating and she was booed and harassed by Celtic fans in a playoff game that lead to a big kerfuffle in which Boston Globe columnist and ESPN personality Bob Ryan was suspended for an inappropriate remark about wanting to smack her– which is of course is inappropriate and completely unacceptable– but the Kidds played this out for all it was worth, making them even more unappetizing to many fans.

Now Jason and his wife at some point earlier in their relationship had a bit of a dust-up. The timing of this or its exact nature/cause is not immediately recalled by us, but we certainly do remember the aftermath.

In a bid for understanding, forgiveness, a personal apology to his wife (Mea Culpa, Mea Culpa, Mea Culpa) to raise awareness of the problem of domestic violence and who knows what else. The only thing missing was Kidd announcing he was joining the Opus Dei Cult and would from now on self-flagellate with a little whip in a ceremony at the scorer’s table before each game. Jason Kidd decided to turn this to his advantage by playing it out in public and garnering himself everlasting publicity.

From that point on, he decided to launch into a self aggrandizing routine that would go on seemingly forever.

He started to blow kisses before (or after?) every single free throw he took in an NBA game. It was nauseating and, to our view, Kidd’s actions were designed to draw more attention to himself and only helped diminish the seriousness of spousal abuse and domestic violence.

But he certainly did set some records. That kind of volume of overflowing expressions of affection expressed on a public stage through the act of gesturing with imaginary flying smooches towards members of the audience had not been seen for quite a long time– not since an aging Liberace spotted Greg Louganis and the cast of Chippendales in the front row of one of his Vegas concerts.

Well, it finally ended– the Kidd’s marriage that is– and we think the “Dating Game” send off routine as well. But it is hard to tell, since Jason Kidd took so few shots his last few years in the league with Dallas and the Knicks, he seldom got to the free throw line. Jason always thought a low percentage-late in the shot clock pass was better than a wide open shot– so we’re not sure.

Well, Jason Kidd sure is proving that his hiring as a head coach with zero experience was a heaven-sent gift… to all the other miserable but now playoff-dreaming teams in the moribund Eastern Conference.

But the Nets have identified the problem. This week they have “reassigned” million-dollar-a-year-salaried assistant Lawrence Frank from the bench to the office to “prepare scouting reports”.  This is interesting because Frank was paid this huge amount to keep him from leaving to join Doc Rivers with the Clippers (and to help guide Kidd in his first coaching job) but Kidd blew up at his former head coach last week in a team meeting– since Jason certainly knows more about guiding the Nets than Frank who has actually been a head coach in the NBA.

We’re sure it will all work out.

This year Kidd has led the Brooklyn Nets, with their cast of injured, washed-up, overpaid roster of coach killers, ball hogs & and Boston Celtic Retirement Home Occupants to the worst record in the Atlantic Division, and, after Thursday nights’ embarrassing humiliation at the hands of the equally odiferous Knicks,  another new record that coach Kidd can proudly hold high as his own:

The Nets are now the first and only team in the history of the Association to lose two consecutive home games by more than twenty points.

Congratulations Jason! Here is a big, friendly air-kiss delivered to you– SMACK!!!