My thoughts on “Chip Kelly Speculation Day” weren’t going to fit into 140 characters, so here we are. 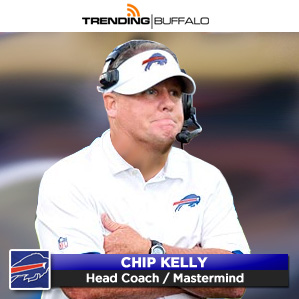 ESPN Radio says that Chip Kelly has wrapped up 7 hours worth of conversations with the Cleveland Browns’ brass and is going to follow that up by meeting with the Bills tonight. Philly’s on the agenda for tomorrow.

My thoughts on “Chip Kelly Speculation Day” weren’t going to fit into 140 characters, so here we are.

It’s midnight and I just saw a tweet from the Bills that they “have interviewed” Kelly, Lovie Smith, and Doug Marrone. Seeing “interviewed Kelly” in the past tense might render all of the above moot as it pertains to Kelly coming to Buffalo.

GET HIM TO SIGN ON THE LINE WHICH IS DOTTED.

It doesn’t make any of it untrue.

(Note: I may add more bullet points after publishing this. You can’t stop me.)