QB Dak Prescott, Mississippi State Can he throw with pressure in his face is the big concern? He threw a couple of picks vs Auburn as team are catching up with… 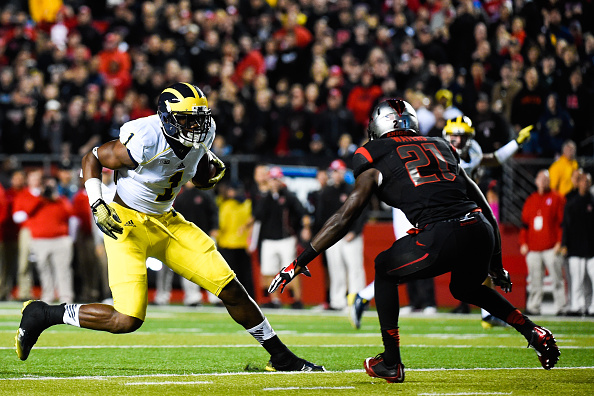 Can he throw with pressure in his face is the big concern? He threw a couple of picks vs Auburn as team are catching up with his love for the back shoulder pass. He bounced back showing toughness and his ability to run was certainly on full display. He’s front and center in the Heisman race.

Same concern as Prescott as ability to throw with pressure in his face. Too often he has a clean pocket and a wide open receiver. That rarely happens on Sundays. He threw for 510 yards and 6 TD’s against TCU and his intangibles are off the charts. I still wouldn’t draft him in the first round. His deep balls in the West Virginia game were a concern for me. Not very good at all.

In a match-up of QB’s for next years draft Mariota clearly outshined Brett Hundley. He is an impressive runner. He rushed for 75 yards and two TD’s. He’s impressing more and more with the Oregon line struggling. This is actually helping his draft stock. Number one player in the draft at this point.

Three turnovers against a bad UNC team. Maybe ND was looking ahead but that game was much closer than it should have been. He bounced back with a good performance in the loss to Florida State. Converting on a fourth and 18 late to keep the game alive was impressive. He has outplayed Hundley this year so he could be moving up the boards as far as the number 3 QB.

Great second half vs Notre Dame. Making throws with pressure in his face. As the said about Mike Tyson, the safest place for him is in battle on the field. He was 15 of 16 for 181 and a TD in the second half.

Had a great game vs Penn State in getting Michigan finally back in the win column. He’s the poster child for a modern TE.

Eight catches for 158 yards vs TCU. He looks like the real deal. He’s so strong and fast. His ability to go after the ball is very impressive trait teams will love.

Had a great one handed catch for a TD that put West Virginia up to stay against Baylor. His hands look huge. Eight catches for 132 yards and two TD’s in upset win over Baylor.

Improved this year to the point where one scout called him a blend between Clowney and Kearse.

With the improvement in Stark-vegas there is real talent. Here’s one guy that will play on Sundays. He’s had a very solid year.

Had three sacks on Bryce Petty as the West Virginia defense held Baylor’s offense to just over 300 yards.

Two sacks and a forced fumble in Florida. Missouri defense forced six turnovers on the day.

Had his best game of the year vs Arizona. They moved him around he got sacks and stuffed the run on a two point conversion late that would have tied the score for the Wildcats.

In spite of a loss against Oklahoma Brown was a star. He disrupted the Sooners offense all day even when double teamed.

I wasn’t high on him coming into the year but he’s improved. Against Stanford he was dominant.

With Todd Gurley out the Georgia defense really stepped up against Missouri and Arkansas. Jenkins and fellow OLB Leonard Floyd were very active in helping make Matty Mauk’s day miserable.

After a poor performance against Ole Miss, Collins seals the win vs Arkansas with a big INT.

FSU secondary has had some breakdowns this year see NC State game but Darby has been one of the better CB in the country. He got picked on in the Notre Dame game. The ND game wasn’t his best. Still he can be a shutdown corner so has first two day pick material.

Picked off a pair of passes against Tennessee. He’s leading SEC with 7 picks this year. He had the circus interception vs Alabama to seal the victory.