The Buffalo Bills are the current reigning champions of the American Football Conference East Division. Matter of fact, the Bills are now the AFC East champions for the second straight… 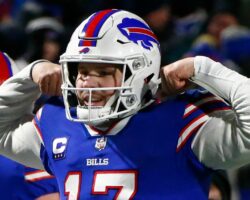 The Buffalo Bills are the current reigning champions of the American Football Conference East Division. Matter of fact, the Bills are now the AFC East champions for the second straight year, thanks to their recent performance at the Highmark Stadium in Orchard Park, New York. The Sunday 9 Jan 2022 clash saw the Bills beat New York Jets 27-10 in the regular-season finale. They still have a couple of games lined up for the 2022 season and they have high chances to secure the Conference’s East Division title. How’s that? Never mind, I’ll explain it in a bit. For now, let’s take a look at their season schedule:

For starters, there are four teams in the East Division of the American Football Conference that belong to the NFL. These teams are; Buffalo Bills, New England Patriots, Miami Dolphins, New and York Jets.

Now, the Bills will play against each team twice. These teams will also play against all the teams in the AFC North Division. Due to the fact that the Bills are the current champions in their respective division, it means that they’ll play the other first-place finishers in the entire American Football Conference.

This will see the team participate in 17 matches; 8 at home and 9 away. You can make correct predictions for these upcoming matches at your favorite betting site and win money. All you have to do is read my analysis of the Bills’ recent performances below. You can also boost your chances of winning by checking out the information available on Oddsshark.com. For starters, this is a fully-fledged website for betting odds, tips, and picks across different sports, casino games, politics, and much more.

Below are the teams that the Bills will play against this season:

The Buffalo Bills are expected to clinch the 2022 AFC East title and here’s why?

First, they have won 2 previous championships i.e 2020 and 2021 consecutively. Secondly, the team is still being coached by Sean McDermott who led it to victory both last year and last year but one. McDermott joined the Bills in 2017 and immediately lifted the team from 3rd position to 2nd, coming right after the New England Patriots. Even though the Bills dropped back to #3 in 2018, they quickly reclaimed their 2nd position in 2019. Thirdly, the team still has the players who delivered victory on the lineup for the 2022 season. I’m talking about players like Josh Allen (quarterback), Gabriel Davis (wide receiver), Efe Obada (defensive end), and Devin Singletary (running back). These players have delivered consistent performance and it’s hard to think that 2022 will be different.

Are you a bettor? Or do you like to predict AFC match outcomes for fun purposes? If you answer yes to any of the above questions, chances are you are about to make predictions for the AFC East Title 2022 season. I’m sure you wonder whether the defending champions–the Buffalo Bill will continue to successfully defend their title this time around. According to my analysis of the team’s performance track record since 2018, I can predict a third consecutive victory for McDermott’s boys. Looking at the prevailing circumstances, it’s safe to say that the Bills have better chances of winning the championship than any other team in the competition. That’s because; (a) winning is all the New York state boys have been doing since 2020, (b) the well-performing coach hasn’t been changed, and (c) the good players haven’t left the team either.

So, which team would you bet on? Is it something else other than the Bills? If yes, feel free to share with us below so that we can see.