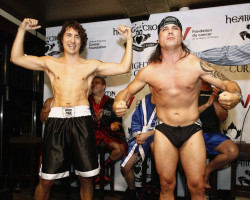 Buffalo @ NEW YORK J-E-T-S, JETS! JETS! JETS! (-3)
…. This week, Rex Ryan appointed Linebacker IK Enemkpali as team captain, just in time for the New York Jets game on Thursday. Of course, LB Enemkpali was with New York in the preseason when he sucker punched starting QB Geno Smith in the locker room and knocked him out. From now on Geno will forever be known as “The Chin.”

….. IK was released by the Jets immediately. Predictably, Rex Ryan then immediately signed him to the Bills’ roster, saying it was based on his sparse but positive experience coaching him last year when he ran the Jets.

…. Of course we all know it was just to have him available for this specific week to play the Jets. Either that or Ryan was planning to introduce Enemkpali’s stealth attack technique into Buffalo’s defensive training regimen to improve forearm shiver delivery.

…… Rex is a Minister of Propaganda like no other head coach in the NFL, and naming Enemkpali has already worked its intent this week by causing many of the Jets to take the bait and focus on the distraction. They have become agitated, their panties are in a bunch & they are taking to the Twitterverse to whine, threaten & vent.

…. It is well documented how organized professional boxing has declined over the last few decades, many saying it is dead, but amateur fisticuffs like Enemkpali’s attack & brawling keep showing up in the news.
…… There is a new “app” now available called “Rumblr” where participants communicate online to meet and engage in fisticuffs. This is almost as scary & potentially dangerous as other missing vowel services like “Tumblr” & “Grindr.”

….. On these apps, participants hook-up for quilting bee dates, coffee or recipe exchanges with other walking embellished resumes of the unknown. These can be potentially more dangerous or violent than “Rumblr.”

…… Especially when certain farsighted/confused/unenlightened/overtly randy people accidentally “swipe right” on “Grindr” when they think they are using “Tumblr.”

……. The development of “Rumblr” is the logical evolution of cowardly predecessors like “The Knockout” game that plagued the world on and off over the last two decades. That moronic endeavor involved knuckle-draggers sucker punching people in public and the cowards posting the filmed incidents online.

…… However, sometimes being the bully is a mistake. Unforeseen fisticuffs can have unintended consequences. In March of 2012 in Ottawa, Ontario, Canada an interesting charity boxing match took place. A political challenge resulted in a three round fight to raise money for cancer research. The fight would pitch Conservative Senator Patrick Brazeau against rookie Liberal Member of Parliament Justin Trudeau.

….. However there was subterfuge, political machinations that would have major political implications. Trudeau was the son of legendary Canadian Prime Minister Pierre Trudeau who held office from 1968-1984 (except for 9 months in 1979-1980). He is still despised by a lot of Conservatives despite the fact he passed away in 2000 & hadn’t held power for over 30 years. The spectre of his oldest son taking over the third place Liberal Party sometime in the near future still posed a fallacious threat to their plans to rule the country forever.

…… Many Liberals thought the fight was a big mistake for Justin. They figured the negative aspects of his image would be reinforced & he had nothing to gain from the circus that would ensue. He was already seen as nothing like his father. He was more like his mother, sensitive, happy-go-lucky, overly polite, a school teacher ( Horrors!) a metro-sexual wanderlust who had never found a steady career in adulthood a child of trust funds and privilege. Him losing this fight would provide eternal ammunition for the Conservatives to portray him as a rich punk who got his do.

….. Despite this and the fact Trudeau had not show any great debating skills or leadership potential in Parliament, …. the right wing had an irrational fear of his last name. The thought of the Liberals rising again like a Phoenix from the funeral pyre with the son of the phantasm of Pierre Elliot Trudeau leading them to victory was an obsessive addiction they could not ween themselves from.
…… The Conservatives recruited Patrick Brazeau for a reason. He was a rarity, a Conservative politician of Native Canadian heritage who was popular in Quebec. There were many accusations that his lifelong appointment to the Senate by Prime Minister Harper was favouritism at its worst. He was needed in this instance because he was the most likely man able to physically hurt Justin Trudeau.

……. He had done time in the military including specific martial arts training. He regularly worked out, boxed and aspired to be a Mixed martial Arts expert. He also had a dubious past. He had admitted to using steroids in the past. his life resume was a checkered record of bar fights, drug use, premeditated assault, various other criminal activities & domestic abuse.

….. { After the boxing match, in 2013 he was kicked out of the Conservative caucus for his behaviour. In 2015 he was caught up in a huge Senate scandal involving inappropriate allocation of monies & padded expenses. Recently he pled guilty to cocaine possession and assault but the Quebec judge ruled he would receive no jail time and no criminal record? ……. he still has to repay over $50,000 in disallowed housing expenses he claimed while sitting in the Upper Chamber. Amazingly, he has only been suspended as a Senator and not been permanently kicked out. }

….. Brazeau got caught up in the hype & vowed to smash Trudeau’s pretty face in. Conservatives were drooling at the prospect of having that permanent post card plastered all over any future campaign. On-line postings belied a good natured charity event and spoke more of a very nasty upcoming brawl more akin to professional wrestling without the acting.
….. Everybody knew Trudeau had boxed in his 20’s and was physically fit like his father who was a brown belt in Judo. Still, nobody expected him to win against the heavier, more muscled Brazeau. Odds going into the fight were anywhere from 3-1 to 5-1 favouring Brazeau. A reporter said he was offered 10-1 by several drunken Conservatives just before the fight. 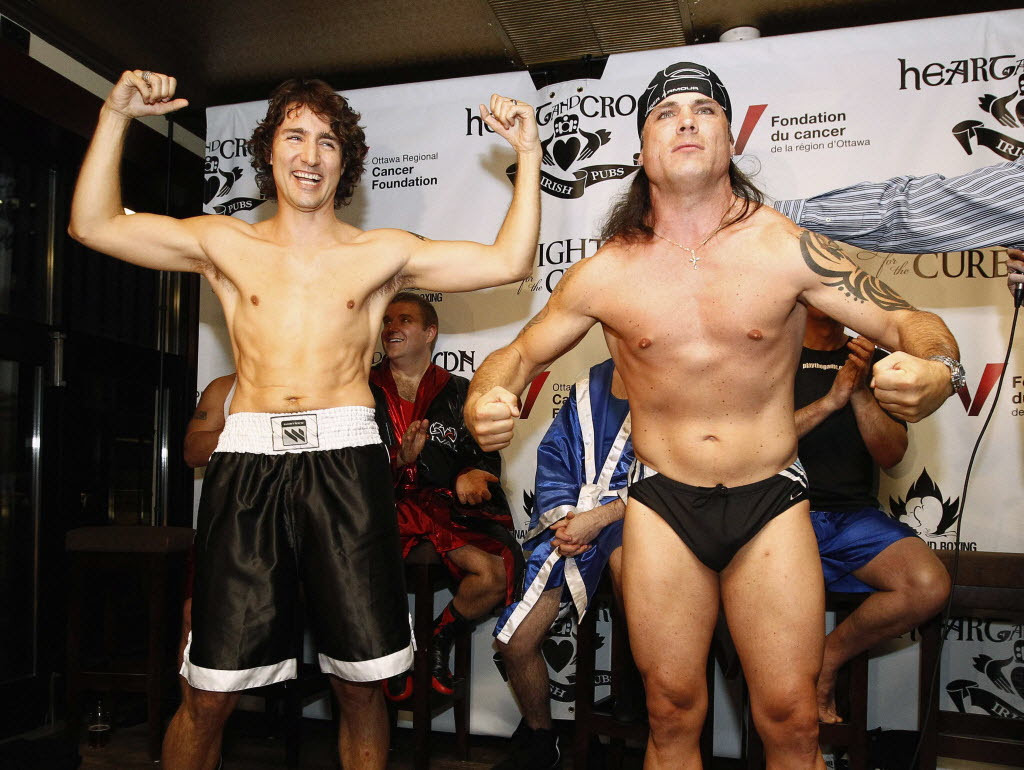 …… At the fight, the charity-good will aspect fight took a back seat to some very ugly language, political partisanship & inebriated unruliness. This was especially true amongst many Conservative politicians, who noticeably drunk, started cursing like sailors and yelling out things like “Make him go visit his dead father Patrick!” …….. “Kill the skinny fag!” and even worse things in French.

…… Journalists who actually attended said the atmosphere in the 2,300 filled to capacity hall was much worse than reported in the aftermath or how it appeared “Live” on the Sun TV feed. The commentary provided by the pathetic Sun TV announcers as heard on the You Tube video of the fight pretty well sums that up.

{ The Toronto Sun is a right wing rag tabloid not unlike the New York Post. The Sun TV channel it spawned has since gone defunct due to lack of viewers and the preponderance of mentally limited, unprofessional on-air personalities like the bone-brained chuckle-heads who commentated on this fight.

….. In the end, the calmer Trudeau endured a furious opening round assault and dominated the fight until it was mercifully stopped in the third round. Justin adopted Muhammad Ali’s “Rope-a-Dope” strategy against George Foreman in the “Rumble in the Jungle.” He exhibited resoluteness, calm and a solid chin, the traits of a future leader. Trudeau was a gracious winner and a lot of money was raised for cancer research.

….. The unexpected victory was a springboard for his career.

….. Less than a year later, Trudeau became Liberal leader. This past summer, he took the Grits into the Federal Election trailing badly in third place with about 25% national support. By the end of the 11 week Marathon election campaign [ Marathon by Canadian standards, sprint by American], he had won with a surprising majority government and 40% National support.

….. The Conservatives worst nightmares were now proven prophecy. They had suffered a humiliating defeat.

Rex Ryan often plays the role of Brazeau more than Trudeau, of Duran more than Sugar Ray Leonard, of Sonny Liston more than Floyd Patterson. There is a time and a place for each.

…. Thursday is not the time for the Trudeau approach
….. New York City, there is a new sheriff upstate. The Jets’ ex-coach always seemed more suitable for the environs of blue collar Western New York than the inflated real estate of Midtown Manhattan. Now Rex returns for the first time with his new team and his indomitable & unapologetic comportment. Some of the Bills appear to be playing off that.
…… It is highly unlikely that the Jets will be mentally focused enough in this game to beat Rex & the Bills invading Gotham like a Mongol Horde rampaging through Asia Minor.

…… Even more unlikely is that Geno Smith will ever challenge IK Enemkpali on Rumblr to a charity boxing match after the game in the parking lot next to the Meadowlands’ swamps outside MetLife Stadium.

….. and even more unlikely than that is Geno Smith getting into this game ( barring injury to Fitzpatrick ) and leading the Jets to victory.

…… Bills tie the Jets for second place in the AFC East.