2019 saw the Buffalo Bills on the rise, and anyone who wagered on them at the SugarHouse online sportsbook PA will have wound up in the money. The team went… 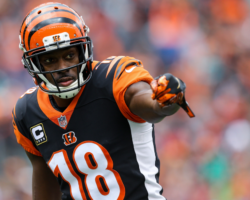 Which players should the Buffalo Bills go after in 2020?

2019 saw the Buffalo Bills on the rise, and anyone who wagered on them at the SugarHouse online sportsbook PA will have wound up in the money. The team went 10-6 and won a wildcard playoff berth in the AFC. Their postseason campaign didn’t go quite as swimmingly, with the Houston Texans putting paid to the Bills’ ambitions after a strong first-half performance. Now is the time to rebuild and recover, and happily the Bills are in a strong position to do just that, with a reported cap space of $89m to spend.

The lynchpin of the current side is undoubtedly quarterback Josh Allen, who has proved himself the ace in the pack since he was signed in the first round of the 2018 draft. Many at the time thought this a dangerous decision, but they’ve been proved wrong as the 23-year-old has gone from strength to strength. Head coach Sean McDermott knows that his challenge in 2020 is to build the best possible team around Allen and maximize the full potential of the Wyoming wonder boy.

Ngakoue is coming to the end of his rookie contract with the Jacksonville Jaguars, and although they’ll almost certainly want to hang on to him, they only have a total of $1.25m to spend this offseason. That’s a fraction of what the Bills have to play with, and a fraction of what Ngakoue’s asking price is likely to be. He’s said to be looking for at least $22m as a free agent, but that could be worth paying for the Bills to shore up their defensive line.

Buffalo’s defense was its greatest strength last season, but it all fell apart in the second half of that match against Houston, revealing weaknesses that are only going to become more apparent if drastic steps aren’t taken. With Lorenzo Alexander retiring, bringing in another veteran player to lead the defense may be a smart move, and Klein has the advantage of knowing head coach McDermott’s style of play, having played for him from 2013 to 2016 when both were with the Carolina Panthers. Now with the New Orleans Saints, Klein has started 42 out of 43 games for the team, and the 29-year-old outside linebacker is now a free agent who would slot seamlessly into the Bills’ back line.

The Bills claimed Phillips off-waiver in October 2018 from the Miami Dolphins, and the following March, they signed him up to a one-year deal worth $4.5m. It may have been the bargain of the century, but now that the year is up, can Buffalo afford to lose their star defensive tackle? The price tag will certainly be a lot higher, but as a major part of the Bills’ unstoppable rise over the past year or so, the 29-year-old premier pass-rusher knows that he’s worth it.

Once the defense is patched up, the Bills need at least one top wide receiver to join the team. Cooper is likely to hit free agency after a couple of stunning seasons for the Dallas Cowboys, and while the Cowboys will undoubtedly want to keep him, they’re going to have to make some tough decisions about who stays and who goes, as their quarterback, Dak Prescott, is also coming to the end of his current deal. Cooper caught 53 passes for 725 yards in 2018 with six touchdowns, and in 2019 he caught 79 for 1,189 with eight touchdowns. At the start of this season, he’ll be 26 – a versatile, powerful offensive player just entering his prime.

A controversial selection, as the 31-year-old sat out the 2019 season due to injury and only played nine games the season before. Nevertheless, the 6’ 4”, 210lbs wide receiver would be an ideal foil for Allen, and when Green does get to play, his performances speak for themselves. Depending on the price tag, this veteran offensive player would be a welcome addition to the Bills’ ranks in 2020.

Finally, the Bills should definitely consider making room for one of the most underrated tight ends in the league. In 2019, Hooper was one of the main focal points for a struggling Atlanta Falcons team – making 75 catches for 787 yards and six touchdowns, despite not playing in three of their games. The Falcons will try to hang on to him but haven’t got much cap space to play with. Hooper could certainly be tempted to Buffalo, where he’d make a perfect playmaker for Allen.

These six players would help the Bills achieve their ambitions to become a first-rate team once again. By rebooting their offense around Allen and refreshing a strong defense, the Bills could really be contenders in 2020. They’ve got the money to spend, so why not spend to win?