The sports fans in Buffalo are eager to see some playoff success of their biggest two franchises in the city – Bills and Sabres. Over the recent two decades, things… 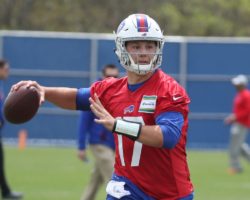 Buffalo Bills Are on the Rise

The sports fans in Buffalo are eager to see some playoff success of their biggest two franchises in the city – Bills and Sabres. Over the recent two decades, things haven’t been shiny for these organizations. Sabres had two notable playoff runs, but couldn’t win anything, while Bills’ situation was far worse.

However, Sean McDermott’s guys showed some signs of life recently and indicated that they might have a bright future if the organization keeps them together. With 10 wins and 6 losses, the Bills reached the playoffs, and were far above the expected level of play, posting more victories than Vegas predicted them to do.

And that wasn’t all. Allen and the boys had a chance to make a first-class sensation and beat the Houston Texans on the road in the Wild Card round, but managed to drop a 16-0 lead and lose after overtime, 22-19.

Right now, the bookmakers don’t believe in Bills’ strength, and they aren’t convinced that this crew might repeat the results from the past campaign. Right now, their margin for wins is 8.5, and odds for Over are 19/20 and for Under 4/5.

Once mentioning betting, sports betting in the state of New York is now legal, but not in all forms. For example, online betting is still not legalized in full, but you can find casinos and sportsbooks that will offer a variety of options to your needs. The state is looking up to the legal betting in nearby Pennsylvania, and we can assume that all aspects of sports gambling will be sorted out pretty soon and that each person in NY will experience the entire specter of possibilities provided by worldwide brands.

But to come back to the Bills and their chances of making something notable in the near future. They are second in line to win the AFC East. Of course, the top contenders are the New England Patriots, who will have Tom Brady behind the wheel for at least one more year.  Odds on them to defend the division for the 12th straight time are at 1/4. Bills are behind with 7/2, and the Jets come after 15/2. The last-placed Dolphins who are in the process of reconstruction are sitting at 14/1.

Surprisingly, the franchise from Buffalo is sixth in the list for winning the AFC. It is a big rise having in mind that before the start of the 2019 season, just a few saw them as the winning side, let alone a playoff contender. Right now, Bills sit at 14/1 to win the AFC title.

The top candidates are the reigning Super Bowl champions the Kansas City Chiefs, 3/1, after them come the Baltimore Ravens 13/4, New England 13/2, Pittsburgh Steelers 9/1, and the Tennessee Titans at 12/1.

So, all in all, it is not a bad starting position for McDermott’s unit. Since he took over the head coaching duties at Buffalo, the team improved a lot. Already in the first season, the Bills entered playoffs, after a drought that lasted for 17 years.

Although the Bills, lost immediately in the Wild Card round to Jacksonville Jaguars, it was considered as a massive success. Overwhelmed with bad contracts, which were consequences of previously brought bad decisions, and a poor selection of the team, the franchise showed signs of life under the 45-year old coach. Now, he has Josh Allen as the cornerstone of the generation, and along with a pretty good defense, and a solid offensive core, the Bills are in a perfect position to continue their growth.

Allen has been listed as one of the top 20 candidates for winning the MVP trophy next season. Odds for him becoming the most valuable player are 50/1. Patrick Mahomes leads the way with 7/2, and the Chiefs QB is followed by the reigning MVP Lamar Jackson and Russell Wilson, who are both at 6/1. Texans’ Deshaun Watson is 10/1, while Drew Brees and Aaron Rodgers with at 16/1.

The Bills’ fans are anxiously waiting for the 2020 season to start. They have high hopes from the upcoming campaign. For 25 years, their team didn’t win a single playoff game. Back in 1995, Buffalo defeated Miami Dolphins 37-25 in the Wild Card round, and ever since, this franchise is experiencing failures, regardless of the fact whether it is in the regular part of the season or the playoffs.