It’s best to accept defeat before you even begin.

You Will Not Win Your NCAA Bracket Pool 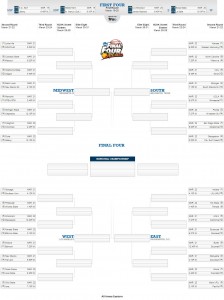 Selection Sunday has come and gone. Now we’ll sit and listen to “experts” for information on which teams will win, which teams will trip and sleepers that will go deep into the tournament. We’ll theorize, deduce, ponder, debate, justify and eventually just scribble a name down on a line because, well, dammit, they were our favorite team when we were growing up, we went to college there or “I hate UNC, they just can’t win this game!” Surely that diluted logic will help you nail the Final Four.

There are the emotional highs and lows and general unpredictability the tournament promises annually. The temptation of March Madness is predicated on how seductive and derisive the dance can and will be. You’ll be drawn in since there is a chance to win. No matter how disappointing your bracket(s) have been in the past, you’ll be ready and waiting, because this (!), yes this is the year for redemption. Let the games begin.

Opening round euphoria. This is a deceiving and entirely tease-worthy round. The round that makes every other round seem unfaithful and unreasonable. After your selections; and teams are lopped from 64 to 32; and you’ve got 28-30 of your picks still left, you’re feeling high. Euphoric even. The “everything is looking good,” “smooth sailing” mentality sweeps over you and clouds your judgment. You have entered a state of falsified confidence. Uh-oh.

CORRELATING EMOTION: Hope. You are undoubtedly excited and hopeful that this is the year for you to be on top. No more losing, life is good ‘cause dammit, your bracket is good. Congratulations, you’ve convinced yourself everything this year is going to be different from all the previous years of utter failure. Nice.

After this round, things start to fall apart, just not so much that you lose faith in your brackets. Sure, some of the 20+ that you’ve filled out so diligently are still looking decent. You’re Elite 8’s are intact, 11-14 teams are still plugging away and you feel satisfied. Good job, you’re starting to become delusional. Bravo. Self-delusion is the key to survival during March Madness.

CORRELATING EMOTION(s): Irrationality. Blissful ignorance. These feelings run amok and rampant. You examine and reexamine and start comparing your bracket to other people’s brackets and see what you could have done differently in those decisive 8-9 matchups that always seem to screw everyone over in the long run. And you, unfortunately, have been screwed again. Not to worry though! You’re statistically still in it. The next round is the most important after all.

Hm. Hmmmm. Hmmm? Really? Really? REALLY?! “How the hell did they get this far?!” “They didn’t even win 20 games!” “4 of my Elite 8 teams are left. What the hell?” “What happened?!?!” Those are some of the comments you’ll say, some with more profanities and enthusiasm. It’s inevitable. It’s the curse of the bracket. It’s the harsh reality. Elite 8…not so great.

CORRELATING EMOTION: Anger. There is really no way that you can win now. After checking each and every bracket, you start to wonder how it got so out of hand. How could tenth seeded Yada Yada State beat #2 Super Duper U? How is SDU out? HOW?! HOW?!!!!!! This was supposed the year, the year of redemption. Now the only redeeming quality of this tournament is that the team you have winning the whole damn tournament is still one of the four Elite 8 teams you’ve got…but, their opponent’s out. OUT! You might as well admit it, you’re done.

Now that you’ve invested so much time in watching the tournament, the upsets and the bracket busters, your anger becomes disbelief. Realistically, there is nothing left to do but sit back and hope like hell a real flyer comes through and decimates the field for every single person that created a bracket or twelve this year. It’s the misery loves company ideology. It’s all that’s left.

CORRELATING EMOTION(s): Cynicism, disbelief and frustration. The only way that you can even tolerate the tournament at times now is the bleak possibility that if for some miraculous reason beyond your control, the other number one left that everyone else seems to have picked but you loses. Then you might be able to pull out the greatest (in your humble opinion) comeback in bracket history. Good luck with that. But really? Really? Seriously…? In all actuality, it’s tough. Your brackets are pretty much null and void heading into the Final Four. You’re already thinking about next year and how this year would have been more enjoyable had you been in a sports book in Vegas. But you’re not. You’ve got work tomorrow and somehow that receptionist who has never watched a game in her life who picked teams out of a hat (!@#$%) is going to win. Where’s the justice?

“?” While you have no teams left, this round still provides excitement and a childlike zeal that had you gone into this year’s tournament with, you wouldn’t have wasted three weeks of your life analyzing teams. The only saving grace is that ‘Duke didn’t make it’ you think, nodding contently to yourself.

CORRELATING EMOTION: Acceptance. The “oh well” mood has successfully settled in now. You look back at your bracket(s) and begrudgingly acknowledge that, in retrospect, had you just picked certain teams based on talent and not your personal distaste for them, you might have done better. Biased-agenda aside, these brackets start to seem like a crapshoot. !@#$%…

Well, you didn’t see that coming. And the game was actually good. Hm, maybe there’s something to this not gambling and betting on sports thing…although, if I had picked…

CORRELATING EMOTION: Rationalization. You gave it your best, you filled out so many brackets that you’ve become familiar with the assistant coaches on 11th seeded teams. This year just wasn’t your year. And you’ve adopted the “Dem Bums” slogan, “Wait ‘til next year.” And maybe, just maybe, you think to yourself, “I won’t even fill out a bracket next year. “

Liar. See ya at Caesar’s.