Because texting and Social Media sites are the only current known forms of human communication, your on-line reputation is important. It’s so important that (gasp) some people lie. People deceive… 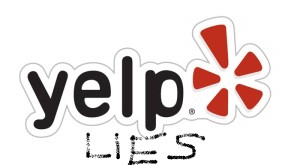 Because texting and Social Media sites are the only current known forms of human communication, your on-line reputation is important. It’s so important that (gasp) some people lie. People deceive others when talking about their achievements, folks exaggerate their misfortunes and businesses lie with fake Yelp and Facebook reviews. It happens and, when it happens, it’s kind of obvious.

Space out Your Lies

It is clear from past posts here on Trending Buffalo that I am obsessed with Yelp reviews and Yahoo Answers. My problem isn’t the fact that businesses lie, it’s that they don’t know how to lie effectively. If you get a bad review and you want to bury it underneath a series of good reviews, space out your fake entries. Take this pizza place, for example: 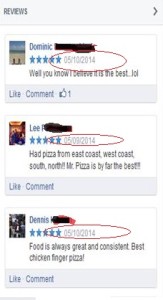 So, you have a total of three posts, and it just so happens that all three of them were written by people on two consecutive random days in May? Was there an awesome crop of tomatoes that made these two days of pizza-making particularly effective? Did you try real hard on these two days? Were these three people together when they visited your pizza place and they only own one computer so they had to take turns posting their glee on Facebook? No. You lied which, again, is fine. Just do a better job of it. Be patient and space out your lies.

So you need some reviews to beef up your on-line presence but your customers have not done so organically. It doesn’t mean that you’re terrible. Most people forget that you made them happy fifteen minutes after leaving your establishment. Your only option is a fake review. You either create a fake, authentic-looking Facebook account or ask a friend to post some nice words on your wall. It’s fine. Your friends probably mean what they say. They shouldn’t however, sound like this: 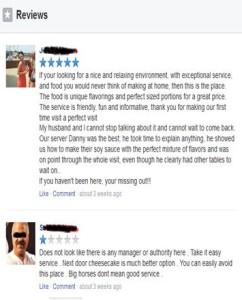 This is actually a double-whammy post. With the negative post below, it’s clear that this place pulled the emergency ‘damage control’ lever. The problem is that no one talks like this. No one thinks service is “exceptional”. No one uses the phrase “on point” to talk about Danny. Danny isn’t “on point”. He can be “nice”, “quick”, “friendly” and “clean”, but he isn’t “on point”. Use real words. Misspell things. Don’t use punctuation. Swear. Be creative and rate your place 4 stars instead of 5 stars. 4 stars is still good. It’s believably good.

Wow, that was short and to the point. It’s an actual post from a real person who went to a place and liked it. Learn from that. He used the term “B-lo”, which I would never say, but other people who don’t own restaurants say. It looks genuine. Maybe, when you’re lying about your business, you can make a colon and an end parenthesis into a face, because that’s what REAL people who write reviews do, for some reason. Make your posts seem authentic so that people will believe your lies.

Calm down before you complain!

Let’s say you don’t own a business, but you still want to lie on-line to make sure no one supports those stupid jerks who wouldn’t let you get a coupon for a pair of sneakers because they’re idiots. Maybe you didn’t have the most traumatic experience in the history of mankind, but you still got bad service and you want someone to pay. That’s fine. But, if you want to make your negative review a successful negative review, calm down.

Don’t be this person: 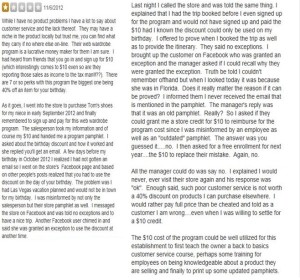 Holy cow! That just kept going. Um, this person is displaying aggressive, obsessive behavior. I stopped reading that post when she got to the part about Las Vegas. Who has this much free time? If I want to buy some slacks and I’m not sure whether or not the business I have chosen to frequent has quality slacks or busted dungarees, I want to learn from your review in three sentences or less. Anything more than that looks like a hopeless, desperate cry for help from a lonely person who has nothing better to do than complain for 8 paragraphs. I’m not saying this is true about you, but that’s the way it comes across. A potential customer will probably ignore this post and assume you have social problems.

Holy cow! That’s a real person who was super helpful. If my leg is bleeding, I don’t want to wait hours for sub par medical service. I’m sure their experience was worse than they lead on here, but I don’t care. I just want to know if I should go here for quick medical treatment, and the answer is a clear ‘No’. This person gets revenge for poor service. Sometimes lying isn’t the answer (double gasp)! If you don’t exaggerate, people who have spent their lives listening to others exaggerate won’t ignore you.

I hope this helps. Business owners have a ton of crap to worry about. Attending to social media issues isn’t always at the top of the list. With a few adjustments, you can effectively lie to promote your brand. And, if your server forgot your lemonade, don’t talk about your trip to Las Vegas. We’re not your psychiatrist. We don’t get paid by the hour.