Ralph Wilson may be right about one thing: the threat of blackouts really does increase ticket sales… to Russell Salvatore.

Ralph Wilson may be right about one thing: the threat of blackouts really does increase ticket sales… to Russell Salvatore.

Blackouts are not driving fans into the stands: the vestigial policy won’t make or break the accounting books at One Bills Drive, and it is not keeping games off of our TV’s. Russell Salvatore stepped up and purchased the remaining 10,000 tickets for this weekend’s Bills/Rams game so that the blackout would be lifted – and more on that later – but fans could also watch last week’s blacked out Bills/Jags game.

Here’s a few paragraphs of eloquence from Ryan over at the Goose’s Roost:

“I watched the Bills game at home on Sunday.

At 12:58 p.m. I replaced one of those creepy penguins with another high-definition television. Switch around a few HDMI cables throw in a laptop and at 1:01 p.m. I had the Bears/Packers game on the small TV and the Bills game on the big one. The video quality was far from pristine, but it was much better than anything I saw in my high-definition-less childhood.

Blackouts are stupid, a relic of an era technology has rendered obsolete. Legally speaking, it’s the sporting equivalent to jaywalking. It’s sneaking a piece of bulk candy at the supermarket when no one’s looking.

It was incredibly easy to “steal” the Bills game on Sunday. There was nothing to download and no real problems with video quality. Successfully close a few ads and you’re all set. The only real sacrifice was having to check Twitter and my fantasy team on my phone. I’m essentially a tablet purchase away from doing this in some form every Sunday.”

This week, fans didn’t need the HDMI cables – and I tip my hat to Salvatore for the classy gesture he made towards his community. He’s bailed out Bills fans before, and I thank him for it. I’d love to shake his hand.

But we just don’t need the bailouts anymore. In this day and age, all it takes is a couple cables to circumvent the Idiocracy of Buffalo’s NFL team.

We just need a good football team. Your move, Ralph. Make it party like it’s 1999. We’d buy tickets for that. 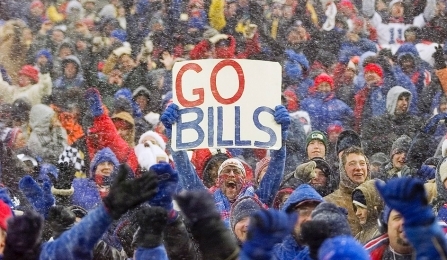 It’s not the weather that is keeping fans away.

This year’s event at Canalside  features a little something for everyone, with food, music, fire performances, and Santa Claus arriving on the E.M. Cotter Fire Boat. What grabbed my attention was the family activities that will take place in a heated tent, featuring Tifft Nature Preserve and the Explore and More Children’s Museum.

Explore and More is an awesome experience for kids, but its current location inside of a school in East Aurora is just too small and out of the way. However, the museum plans to build itself anew on the old Aud grounds:

“The current site serves about 50,000 visitors, while the new facility is expected to attract 130,000 annually. Preliminary plans for the new museum at Canalside call for telling the story of Buffalo, with a centerpiece interactive exhibit on the Erie Canal, as well as exhibits on Buffalo neighborhoods and culture.”

The plan for construction must still be approved next summer, and completion of the new facility is not expected until around 2016. Still, this weekend might provide folks with insight into what is coming downtown – a big time attraction for families (who need to park their cars and buy lunch). Everybody wins. If you’d like to be a part of making this a reality, capital donations can be made here.

For now, head on down to Canalside this Friday, and enjoy the light show.

AMR is coming to Buffalo on the wings of a $50 million dollar investment by New York State, part of the $1 billion pledged to boost the economy here over the next several years.

Aside from adding 250 jobs to the area, “The state’s investment in equipment and lab space for the pharmaceutical research company will draw $200 million in private investment,” according to Governor Cuomo. From the Wall Street Journal:

“Cuomo committed the billion to Buffalo in January and charged the Western New York Regional Economic Development Council with recommending an investment strategy that will leverage it into $6 billion worth of economic development.

After a year of work, the council outlined its strategy for Cuomo and a gathering of community and political leaders in Buffalo on Tuesday.

It recommends six signature initiatives, including supporting manufacturing growth, bringing health care innovations to market and aligning education with the skills employers require. The council also recommended coordinating Niagara Falls and Buffalo tourism efforts and holding competitions that reward entrepreneurs and other developers with incubator space and access to funding.”

The future is getting brighter.

I’ll see you all at that light show on Friday.