Let’s get this right. 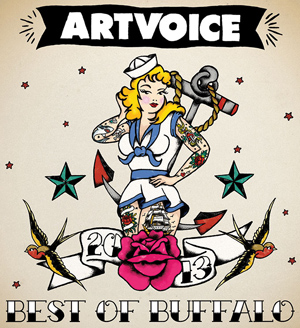 Yesterday, Artvoice unveiled the nominees for its annual Best of Buffalo Awards.

Before a horrible injustice is committed when the winners are announced on May 13th, we’re taking it upon ourselves to disqualify some of the candidates appearing on the list.

REASON: By definition, the next mayor is the mayor that replaces the current mayor. The only person in the entire world who can’t possibly replace Byron Brown is Byron Brown.

REASON: A) Too far B) Cheating by having Sunset in its name

REASON: Of all the places that you could have a picnic, there’s no way that the best one is a street.

REASON: Lydia Dominick was genetically engineered to attract you. You are attracted to her. This is not a secret.

REASON: Watch “In The Buff with Rob Lederman” on Channel 2 on Sunday night. If you’re lucky, maybe you’ll catch his blatant Carnac the Magnificent ripoff.

CATEGORY: One Thing You Hope Will Happen This Year

DISQUALIFIED: The Skyway is torn down

REASON: The only way that thing comes down this year is by mistake, which would really put a damper on the ongoing construction projects and the 700+ events scheduled at Canalside. Big picture? Yes. This year? No.

REASON: Nobody reads this crap.