Smart Thing 1 – Zemgus Girgensons Signs with the Sabres Now that he’s officially on board with a pro contract, it’s probably a good time for all of us to…

Now that he’s officially on board with a pro contract, it’s probably a good time for all of us to stop butchering his name (coughWGRcough). Try saying it aloud a few times now: “ZEM-goos GEAR-gen-sons.”

Think this is not a big deal? C’mon people, we don’t have Harry Neale to kick around for screwing up names and identities anymore.  (We do still love you Harry, and all of your “-isms.”)

Really though – we must respect our hard-earned Ted Blackian “Hockey IQ” and get things like this right.

So practice up. I would not be surprised to see Girgensons earn a blue and gold uniform by the end of the season. He is an incredibly strong presence on the ice, and he can do things like this, and this. For a team whose 2011-12 late season playoff-push mantra was “Forcing our will upon them,” his arrival will be better sooner rather than later.

Kids in Buffalo have it made in the shade these days. City pools opened for the season on July 1st, but back in June, the city began opening 11 of its new “splash pads.” 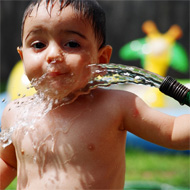 That sure beats what the city supplied me when I was growing up on Crescent Avenue in the 70’s. Back then we’d just take turns drinking water from a hose. Ahh, the Glory days. The apparently toxic, life-threatening Glory Days.

And sure, I could have gone to one of those city pools, but well, you know… urine. The apparently much-more-than-you-think-amount of urine.

Sandboxes are dry, which is nice. Even nicer is the giant sandbox at Canalside. Cheap, low-maintenance, and the kids love it. I gotta’ say “Great job” to whoever came up with the idea.

Not every great thing in Buffalo has to be earth-shattering news. Sometimes all it takes to pull a community’s interest together is “borrowing” a lawn-regreening recipe from a Denver news station and breaking that news every time we’ve had a drought in the last few years. Let the kids have their splash pads – we older folks can enjoy watering our lawns with beer.

Life is pretty good in Buffalo, after all.

Note: “3 Smartest Things” is being produced to go along with the “5 Dumbest Things” series here on TB. “Why three,” you ask? Well – far be it from me to break our time honored tradition of berating each other on the progress of our fair Queen City. Tell you what, when the new Peace Bridge goes up, we’ll go up to five. And of course, feel free to follow me on Twitter to discuss all things trending in Buffalo.