The Buffalo Bills opted out of the new NFL policy that allows the lifting of television blackouts if at least 85 percent of seats are sold. Here’s why this strategy bad for business.

The Buffalo Bills opted out of the new NFL policy that allows the lifting of television blackouts if at least 85 percent of seats are sold.  Here are five reasons why this strategy bad for business.

FLAW 1 – The blackout does not increase ticket sales.

Nine top sports economists wrote in their February filing with the FCC that “Blackouts have no significant effect on ticket sales in the NFL.”  Makes sense. Dropping the team from TV in local broadcast doesn’t suddenly turn a sucky team into a good one, and it doesn’t make the weather comfortable or magically package the entire game experience into 3 efficient hours.

FLAW 2–“Stadium fans” and “TV fans” are NOT the same people. 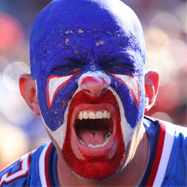 This guy will be at the game.

In person, you’re in for a day-long party and become part of the collective stadium energy.  You play a role in the game, but you can barely see what’s really happening on the field.  On TV, you’re headlong into gameplay intricacies and replays.  You can see every detail, but are detached from the fan frenzy.

Both experiences have their own merits, but taking the broadcast away from one who prefers the TV version of football will hardly-ever turn that person into a stadium goer.

FLAW 3 – The blackout does not suddenly improve the stadium experience.

NFL ticket sales are declining league-wide because the stadium experience is generally awful for the average level-headed human being. Restricting access to an unpopular product doesn’t make the product any better, it just punishes one group of customers because another group has recognized that your product is inferior.

FLAW 4 – The blackout does not make me a more engaged Bills fan.

In fact, it pisses me off.  It reminds me of the fact that the team blackmails taxpayers into forking over money to an obscenely profitable business.  And it seems to conclude that the best way to re-engage me with a product is to hide it from me.

Late last year, I think I heard a rumor that C.J. Spiller might not be a total bust of a first round draft pick.  Apparently, Spiller had impressive games against Tennessee, Miami, and Denver, but you know what? I didn’t see ANY OF IT because the games were blacked-out.

FLAW 5 – Selling tickets is no longer the best way to increase revenue.

The NFL makes the majority of its money through TV revenues and empty stadiums look awful on TV.  If you want to show a packed stadium on TV, lower the ticket prices or give them away until the stadium is filled.  With a full house for the cameras and another 2.3 million regional viewers tuned in, everybody wins.