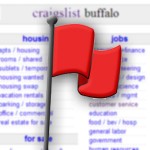 It can also be incredibly interesting. The section called “missed connections” is full of stories of unrequited lust.

Go check it out. We’ll wait.

Sadly, there’s a fatal flaw in every tale. Today, we break down a few of these “relationships” and point out why they seem unlikely to succeed.

For the uninitiated, each headline includes the following information:

She looked at you for a moment because she heard someone speaking in close proximity to her– that’s what people do. It’s evolution.

This lasted “more than a moment” because she was figuring out that you were just another rude guy talking on the phone in public. Perhaps you should’ve been talking to her.

Also, unless you were wearing a toga, a suit of armor, or Lady Gaga’s meatsuit, we can assure you she does not remember a thing about your wardrobe.

You want her to name the TV service you were installing? Come on. There are only four possible guesses– and are we expected to believe the DirecTV guy is gonna delete the “yeah, baby, come back to my house” email if she attempts to seduce you with the password “FiOS”?

It was just you. And who rents a bunch of movies from Redbox? They’re one day rentals.

You don’t want this fine blonde, buddy. That bitch CRAY.

You’re “a nice guy” but your two girlfriends are the sluts, huh?

Listen up– nice guys don’t get to or have to “break up” with multiple girls at the same time.

Noted. Thanks for the post. Good thing you put that online.