Nobody wants to fight you anymore.

Andrew Peters Wants To Fight You

Here’s what we know about former Sabres enforcer Andrew Peters. He parlayed physical strength and a willingness to fight into a ten-year career as a pro, most of it in the NHL. He retired from that profession in 2011.

Here’s what we’ve since figured out about Peters– even after hockey, in his world, words are no match for fists.

It’s a bizarre approach as he attempts to transition into the role of media member (on the Sabres-owned Hockey Hotline radio show and on WGRZ’s SportsExtra) and it keeps leading him back to what made him famous (locally) in the first place. He wants to fight. 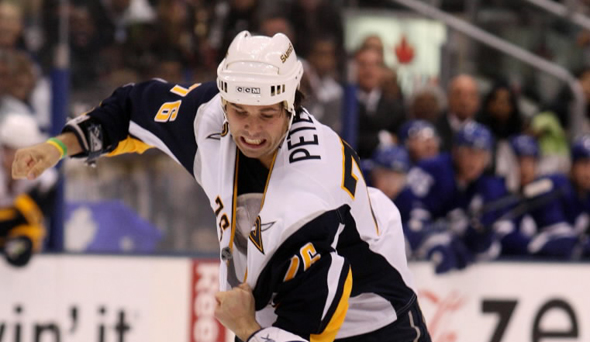 Step right up because Andrew Peters would like to punch you in the face.

Peters’ latest scuffle took place on Twitter yesterday afternoon. It started harmlessly enough, when Tim Graham of The Buffalo News sent out this quick update before the Bills game.

Peters chimed in… and got chirped.

@76_AndrewPeters @ByTimGraham being inactive – something Andrew is often used to

It had the makings of an epic dust-up but sadly, due to the deletion of most of Peters’ side of the conversation, we have to piece it together with an estimation of what transpired.

We can only guess that Peters said something here, although there is no record of it. Something along the lines of “I was a pro athlete and you weren’t so you suck and I do not” seems incredibly likely. Graham , who fights (well) with words, engaged.

@76_AndrewPeters When I covered the Sabres, I played about 1:32 less every night than you did. @62FOREST

This time it’s not a guess. We saw a tweet (since deleted) along the lines of “I was a pro athlete and you weren’t so you suck and I do not.”

Peters retaliated– “you’re such a pathetic dweeb”– deleted but recorded for posterity in Graham’s retweet.

Remember when you used to get me popcorn in press box? You were a nice guy, not a meathead. RT @76_AndrewPeters you’re such a pathetic dweeb

Peters next tweet (since deleted) was something like “I thought you were cool then but now I know you’re just a media nerd/geek/dweeb/pussy.”

@76_AndrewPeters Says the guy who begged me for advice on how to stop @JeremyWGR from winning lockout arguments. God bless, brother.

@76_AndrewPeters Right outside Bills box office. A bunch of other reporters were there, too. I served a purpose for you then. @JeremyWGR

Luckily for Peters– a dude named Mitch came to his defense.

OK, back to Peters.

It’s true, Andrew. You were better at fighting professional athletes than most of the people you will encounter in your post-NHL life. Nobody can, or wants to, take that away from you. It’s also true that you’re often in way over your head when it comes to debate– on the radio, on TV, or online.

The decision to delete some of your posts shows a recognition that you were embarrassing yourself yesterday. That’s a good first step.

Now learn this. Nobody wants to fight you anymore. In the media, words win.

If you want to be a part of it, get better or get out.

We posted a link to this post and Andrew Peters replied.

.@TrendingBuffalo Im embarrassed I got sucked into a social media scuffle. Who wouldn’t be. Its childish. Guilty! Thanks for the headline.