If you think it might sound racist, it definitely is racist. 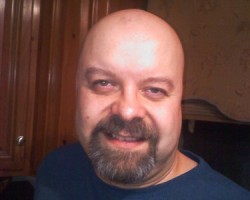 Horrible Racism- Winner of the Internet! The face of the unemployable.

It finally happened last week. The universe conspired to punish someone for not knowing the difference between a “post” and a “blog.” The Internet is a fickle place. If you imply you launch a brand new blog every time you click “publish” on WordPress, it will make you an incredibly insensitive racist and get you fired. It’s just science.

Like all visionaries, Craig Schaller saw injustice in the world and took to the Internet to fix it. ‘There aren’t enough LPGA golfers that look and talk like me,’ the bald Caucasian man living in Rochester thought. And so the WHAM 1180 talking guy fired up Internet Explorer 8, cracked his knuckles above the keyboard, and got to work.

Like all groundbreaking Internet writing, the post is no longer available online. (Just kidding: here it is.) We can only discuss it in clips and phrases, a modern-day Rosetta Stone unlocking the poorly-written cacophony of racism and poor taste.

It truly is a shame that the full text doesn’t exist because it was so, so poorly written. Schaller demands all LPGA tour members speak English in a blog post where he makes writing in English seem like an impossible task. He’s the Sisyphus of blogging, the rock rolling back downhill and flattening him while concentrated stupidity is squeezed out of his pores.

“There are too many gosh darn foreigners on the tour and more specifically, I’m talking about Koreans and Asians in general,” Schaller wrote, punctuation be damned. The LPGA tour had come to Rochester over the weekend and, well, Schaller had to share his hot golf takes. Mostly they were about how he can’t relate to ‘not white people.’

“It’s hard to remember specific golfers when half of them seem to have names that sound like the sound you get when you bang pots and pans together,” Schaller wrote, making sounds like the sounds of an unfunny, close-minded bigot. After Schaller was fired for exercising his First Amendment right to talk like an idiot, he continued to make the Bill of Rights proud when he tried to defend the blog post that put him on the dole.

“I meant it as a tongue in cheek kind of comment made for humor,” said the man still struggling with the English language. “Obviously, nobody likes to be fired, but they are my thoughts.”

Schaller was fired because, while these are indeed his thoughts, there are some thoughts that should not be shared with the entire Internet. The First Amendment does not guarantee your employment, only your right to lose it if you say something stupid.

The saddest bigot is the one who doesn’t know there’s anything wrong with him. Schaller honestly thinks the incredibly racist blog post he wrote wasn’t racist at all.

“It had nothing to do with racism against Asian golfers,” Schaller warbled into a keyboard on Monday morning. “I said in my column that it might SOUND that way, but I can tell you it wasn’t MEANT that way.”

Here’s a tip: if you think it might sound racist, it definitely is racist. You can’t hedge your bigot bets and say it was all for yucks. You also can’t oscillate between saying it was supposed to be funny and then defending yourself against the bitter angry hateful liberals of the Internet.

The irony is that Schaller actually did create a whole new blog here, and his first post sounds exactly the same as the last blog. Since his WHAM blog is wiped from existence, I’m really glad that he doubled down on the crazy and started his own blog. Schaller’s first blog won him last week. Maybe his new blog can win him the next one, too.

Hilarious to me…my followers have increased 10 dold, yet most bash me. Why would you follow someone you despise? Luv2hate

At the time of this writing, Schaller has 136 followers. Ewe Dew® tha mafth.