More than just the funny guy on with Schopp & Bulldog, outgoing Greg Bauch is the heart & soul of WGR. 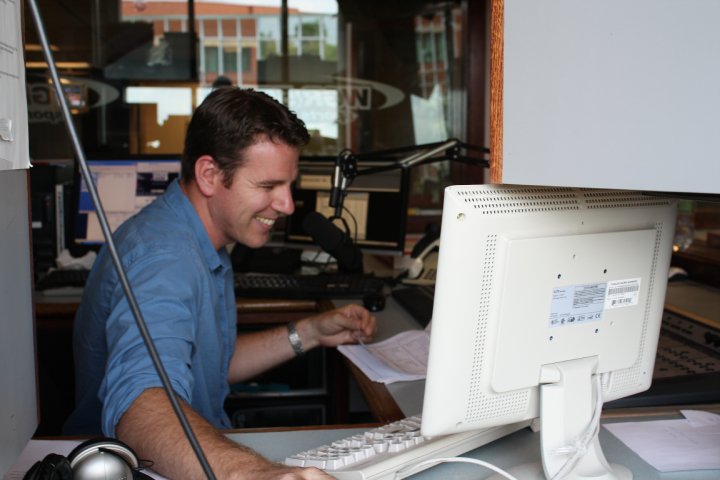 When you turn on your radio Monday afternoon, you’ll barely—if at all—notice the difference. That’s how they get away with it. An era, however, will have ended in Buffalo radio. 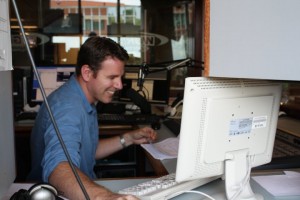 Greg Bauch behind the WGR controls.

Greg Bauch’s last day at WGR is Friday.  Listeners to Schopp and The Bulldog might recognize Greg as the guy who plays funny sound effects or through his radio alter ego, Greg Buck.

While Greg is among the best at finding (and playing at the right moment) silly or interesting sound bites, and Greg Buck is the funniest bit ever on Buffalo radio, others will come along and play sound effects and be funny. That’s just what one does on the radio.

The real story is, after 15 years there, Bauch is, without question, the heart and soul of WGR.

He’s the type of guy who becomes the heart and soul wherever he goes, but in a business where heart and soul don’t often last much longer than the time the “ON AIR” light is lit, Greg has managed to strap that station to his back, allowing an institutional continuity and his goodness to permeate the product for a decade and a half.

I first heard Greg Bauch when he started the way everyone started at WGR a generation ago: as the man at the controls of the late night John Otto show.  The astute listener could hear that the brilliant Otto was often frustrated with the fact that his show was a training ground for “the new guy,” especially when that new guy “cared not a FIG!” about Otto or his show.

Broadcasting Hall of Famer Otto loved Greg. You could hear the smile through the radio as John,  John, your operator on referred to him as my humble man servant Gregor.

John Otto was the first in a very long line of wonderfully talented hosts who was able to find something special in Greg, which is someone who was happy with being, and supremely talented at being, a radio producer.

A good producer does whatever it takes to forge a relationship with the talent on the show he’s producing, and builds an unbreakable trust with that person, allowing the talent to freely host the show with the knowledge that whatever is happening “on the other side of the glass” is being dealt with the proper amount of care.

With all this, a good producer is an equal part of the success of the show which he produces, although any recognition of that fact is almost always an afterthought. He is also accepting of the fact that he might command a quarter of the pay of the talent, while often working at least twice as hard.

Speak to Chris Parker or Mike Schopp or Chuck Dickerson or Tom Bauerle or the late Clip Smith or the late John Otto.  They will tell you, invariably, that their shows were better because they had Bauch at the controls.

A thankless, lunch bucket kind of job in the midst of the glitz, glamour and fame of radio. Greg excels at it because that’s who he is.

But, as Van Miller used to say, that’s only the half of it.

To use a hokey hockey analogy, Greg has worn the “C” in the WGR dressing room for at least a decade as the quiet, stay at home defenseman, who not only moves easily among the superstar goal scorers, but always takes the new guys under his wing and shows them what they need to know.

Name anyone you’ve heard do a sports update on WGR in the last decade, and they were trained by Greg Bauch.  Or trained by someone who went to the Greg Bauch College of WGR Knowledge.

To use another stupid sports analogy, Greg is the quarterback who stands back and sees everything at the station, from all perspectives- the talk show hosts, the update guys, the producers, even promotions and engineering, and successfully has them all working together.

It’s ironic and rare in this day and age, that he has been able to force all that’s good out of that radio station, and the people working there, by his gentle touch, and the fact that you aren’t likely to meet a better human being.  Unless you know Howard Simon.  But Greg has hair, so Greg > Howard.

Like in many fields, the corporatization of radio has eliminated the middle ground where good producers once stood. Radio is ever increasingly becoming a place where there are a few reasonably well-paid on-air talents, and everyone else makes minimum wage without benefits.

Even if someone had the drive, personality, voice, comedic timing, leadership skills and hot wife that Greg Bauch has, it’s nearly impossible that the person could remain in a job that is no longer valued in the corporate structure of radio the way Greg has been able.

So, talk show callers… Your time to harass a legend is running out. Post game coming up.

Greg Bauch will continue to write for Trending Buffalo.

Buffalo Journalist and Historian Steve Cichon brings us along as he explores the nooks and crannies of Buffalo’s past present and future, which can mean  just about anything– twice a week on Trending Buffalo. He also apparently has an unnatural love for some of his former radio colleagues.