Let us wallow in the poor decisions of others.

For reference, today’s 5 Dumbest things will rely heavily on a list of Cattaraugus county’s 10 most wanted people.

5. THEY GOT HIM WITH THE HIGH BEAMS

I’m not exactly sure what the legal aspect of making a DWI “aggravated” is meant to do. Does this mean the guy did it in kind of an abrasive way– like, he wasn’t a friendly drunk? “We were going to let it go but the dude just gave me this aggravating look like, come on man. So I pulled him over.” The guy had a spilled-open canister in the car, too. They should have named it “Aggressive” DWI or “Hustle” DWI because, wow, this guy could not wait to drive while drunk. I bet he had it circled on his calendar.

You need to be trying to have a BAC of +.18, but what really has my attention is that you can be pulled over for not dimming your high beams. THIS IS A CRIME? WHY HASN’T EVERYONE GONE TO JAIL BECAUSE NO ONE WITH THEIR HIGH BEAMS ON EVER DIMS THEM FOR ME AS I DRIVE PAST.

Seriously, looking at these photos is like watching a black and white film. Are things that out of date down there that they didn’t get the memo that all prisoners kinda wear orange now? I mean they even have an internet teevee show about it and all. 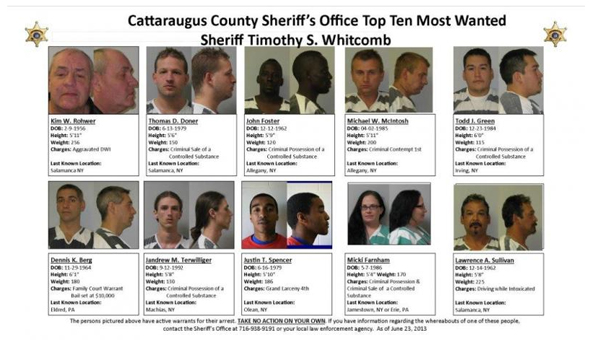 I know. I was surprised, too.

a) Criminal Contempt? What a jerk!

b) Does this man have a neck tattoo of “janelle”?  Oh man, that’s unfortunate. I mean like 995 of tattoo’s are awful but that tattoo is… that’s dumb. Just buy her some flowers, dude.

1. Everybody in Cattaraugus County Is Doing Drugs And Skipping Bail…

… and they are escaping to such exotic locations as Erie, PA and maybe the next town over from that depending on how much gas is in the tank. Look, I know that a lot of Cattaraugus is dirt poor and on hard times. I mean, just drive through Route 219 heading to PA if you don’t believe me. But this is the saddest most wanted list I’ve ever seen.

There is a wanted drunk driver who is probably still driving someplace with an open 40 oz. in his hand. It looks like everybody who gets booked gets out. And you know what? This is probably typical of most of the nation, too. Everybody is getting arrested for being drunk or being high.

And let’s be honest, all of these people should’ve called Saul.