I sat parked on the I-90, for the second time in a day, waiting for important people to drive up to the front of a closing lane and, for the…

I sat parked on the I-90, for the second time in a day, waiting for important people to drive up to the front of a closing lane and, for the second time, I was stuck next to a Wegmans truck. This Wegmans Truck Guy and his sultry ‘Meat Plate’ stare provided a momentary distraction. 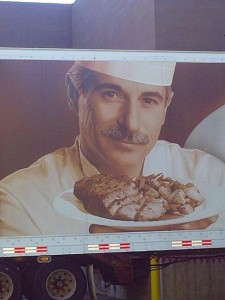 I’m starting to see this guy everywhere. These encounters always leave me with a few questions about Wegmans Truck Guy.

1. Does Wegmans Truck Guy ever stop having sex? Is it constant? Does he take a break during the day to stretch? Is there a chaffing issue?

2. How many women are just out of view in this picture? Hundreds?

3. How am I married in a world where this guy exists? How did my wife’s most primal needs to procreate not instantly draw her to Wegmans Truck Guy’s cave?

4. Does he live in a cave? It’s probably a really nice cave with a kickass stereo and a lot of soft pillows, but a cave with no doors would make it easier for the constant comings and goings of the women who unwittingly throw themselves at his caressing, haunting gaze.

5. Shouldn’t Wegmans Truck Guy be in the Smithsonian?

6. If alien beings visit Earth, and the first person they see ISN’T Wegmans Truck Guy, do they instantly leave, or do they blow up the planet from disappointment?

7. Is any food item so good as to condone this smug, mocking expression? Wouldn’t firing guns into the air be a less abrasive display of satisfaction?

8. Is Wegmans Truck Guy reading this post through a wall of hair and flesh?

Kudos to you, Wegmans Truck Guy. Please be gentle with the women of Western New York.

Greg Bauch is the author of the book ‘Frank Dates.’