I like my chili in the mild to medium range. 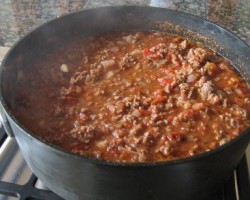 Football season is here Sunday. So, it’s there… on Sunday.

Before you pack up the RV/Mail Truck/Ambulance you’ve converted into a tailgate-mobile with supplies, you need to make chili. The best gift you can give to your Ralph Wilson stadium tailgate buddies for the frivolity that is the Bills season opener is chili. I like to make chili because one pot can feed you for days. Bills fans like to eat chili because, they’re so drunk on Sundays they would eat anything. Chili is better than anything. Make chili.

I would recommend grass-fed meat because the chemicals they’re pumping into our cows are scary. I’ve never actually driven a truck behind the grass-fed cow people, so I can’t prove that they’re feeding their cows grass. It’s entirely possible that they’re spraying chemicals on the grass the cows are eating. I have no idea. Do your own research. This is a chili story. I’m not going to be a launch pad for your politics.

Light a fire under the pot and then go watch CJ Spiller highlights on Youtube. Get lost in the Youtube rabbit hole. Create a ‘Swear Word’ school on NCAA 2013 and lead them to the National Championship. Let the chili cook for a day or two.

Don’t burn your house down. You can’t just leave chili unattended. If necessary, hire one of the neighborhood kids to come into your kitchen and stir it every once and awhile. You can pay them in chili.

Change the batteries in your smoke detector and purchase a fire extinguisher for your kitchen. Baking soda can also work in a pinch for some fires, but you have to be aware of chemical reactions. I’m not a professional fire fighter. You can probably find better fire safety advice on the internet then this story about tailgate chili. Again, it’s just a chili story. Stop basing your actions on this chili story. Take some responsibility. You can’t blame me for your problems.

I like my chili in the mild to medium range. I don’t know what happened to this country that everything has to be so hot. Why can’t people just eat food? Why did food have to turn into a ‘biggest penis’ contest? Why don’t people like to taste their food? I’m tired of going to a party with chili and wondering whether the chip full of chili I’m about to consume will cause me physical discomfort because someone’s parents didn’t pay enough attention to them so they need everyone to suffer.

Here is how most chili-related conversations go these days:

“I don’t know. Is it spicy enough to make my tongue feel like it has just been struck by lightning?”

“Will the acid in my stomach rise up my esophagus and cause permanent damage?”

“Sure! Give me some chili!”

His chili is almost done.

When will it end, heat people? When will your chili be hot enough? Is it really appetizing to eat something that turns your gastrointestinal system into a Los Angeles freeway? Do people enjoy rolling a balloon down their throat and then inflating it? Is the apex of your eating experience having a rope tied around your ankles as you’re lowered into a volcano with a spoon?

I know, a little spice is good. I didn’t say that your chili needed to be bland but, the day I rate a meal based on the amount of time I spend in the bathroom the next day, I retire from eating. It’s not a gas contest. It’s supposed to be food. Just because some kid in 6th grade hit you in the face with a dodge ball and you cried in front of everyone doesn’t mean that you now need to prove yourself by making chili out of quark gluon plasma. Stop pretending like you’re better at eating than me because your chili can provide light and energy for distant planets.