Remembering The Butcher with Steve Cichon 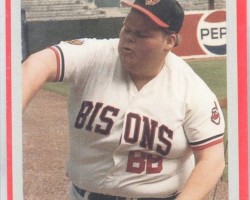 The Butcher and Preservation

I love preservation and giving current context to Buffalo’s old stuff. My attic is a testament to my single handed efforts at saving our city’s past.

Sometimes, though, I’m frustrated that we don’t celebrate things as a city until they are moments from the wrecking ball.

The Bisons have been here forever. They aren’t going anywhere. They have beer and peanuts and baseball. And a giant TV screen. Do we have to wait to show them massive amounts of Buffalove until they decide to move to Carolina with Carborundum or Arizona with Teds?

It’s hard to believe that the Bisons just wrapped up the 26th season of baseball at PilotNorthAmericareDunnTireCocaColaJimmyGriffin (sorry if I left one out) Field. 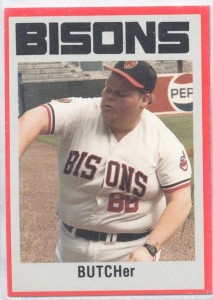 The Bisons’ Most Famous “Bat Boy”: The Butcher at War Memorial Stadium, “The Rockpile,” in 1986.

Also hard to believe: if any good Buffalonian were on Family Feud, and RichardDawsonRayCombsLouieAndersonTheGuyFrom-HomeImprovementJohnOHurleySteveHarvey (sorry if I left one out) asked, “Name a Bisons’ Bat Boy,” we’d all have an immediate number one answer.

No other baseball city in the country has a bat boy turned bat man who lasted through two baseball stadiums and became an icon like our Butcher, shown above in 1986 at War Memorial Stadium.

We love our Bills and Sabres, but our Bisons are a much more Buffalo organization at the heart of it.

Mayor Griffin’s brass ones built the ball park. He just started building it, and sending some of the bills to Albany. And they paid.

The most famous Bisons of the last few decades include the Butcher, Conehead, The Earl of Bud, Larry the peanut guy, and Irv from the 7th inning stretch.

It’s too late now, but maybe next season we can get all hipster and act like we just unearthed this amazing gem that is soooo Buffalo that we need to go and look at it, and drink beer. It’s at Washington and Swan.

Our grandfathers and great-grandfathers worked in grain mills or steel plants and nothing will bring them back. But guess what? They also watched the Bisons at Offerman Field.

And many of us went with our dads to the Rockpile. And the “new” ballpark.

It’s like preservation, without having to strap yourself to anything!

I love finding new-old stuff to rally behind, but I like the old-old stuff, too.

So, I hope I’m not alone in grabbing my Red&Blue/Green&Red/Blue&Orange/backtoRed&Blue (sorry if I left one out) Bisons gear, and looking forward to opening day at a home grown institution that screams Buffalo by screaming “WHO NEEDS A BEER…”

Buffalo Journalist and Historian Steve Cichon brings us along as he looks at some interesting facet of Buffalo’s past, present, or future twice a week on Trending Buffalo.

Steve Cichon looks for Buffalo’s good stories and creative ways to tell them. He’s the founder of Buffalo Stories LLC, where he works with people and businesses to uncover and reap the rewards of their stories well told. For a decade, he’s also collected and shared Buffalo’s pop culture history at staffannouncer.com.