It’s a new year and a new beginning. And even though I have to watch and recap another season of The Bachelor, I still have hope. That’s because sink holes… 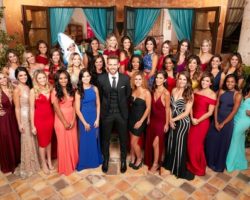 It’s a new year and a new beginning. And even though I have to watch and recap another season of The Bachelor, I still have hope. That’s because sink holes are so unpredictable, theoretically one could open up in my living room and suck me down into the molten inner core of the earth without any notice. So, there’s that! 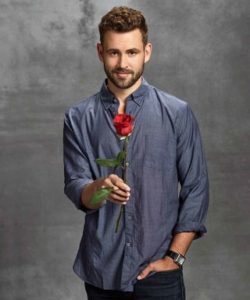 Excuse me, you dropped this in the men’s room

Nick Viall is the 21st Bachelor, carrying on the long tradition of making sure that the position is held by the worst person alive. When choosing the new Bachelor, ABC conducted an exhaustive search from their own pool of STD-ridden socialites. Nick V. tested highest in ABC’s focus group of cat owners, so it was an easy decision.

ABC gives us lots of footage of Nick doing push ups without a shirt on. We also get to see a black bar over his crotch as he gets into the shower. It’s necessary to see this to understand Nick V’s journey for love. I never know if someone’s looking for love unless I see a black bar in front of their crotch. Twenty seconds later after witnessing Nick’s blacked-out crotch, we watch him hang out with his family to talk about true love.

You might be unlucky enough to remember Nick V. as a contestant during the pointless Andi season of the Bachelorette. He beat out juggernauts Juan Pablo and Chris the Farmer, but ultimately lost to a guy named Josh I don’t remember. Josh played baseball, or something. Before that, on the Kaitlyn season, Nick V. lost The Bachelor title to a guy who looked like if Ryan Gosling had a thyroid problem. Keep up! 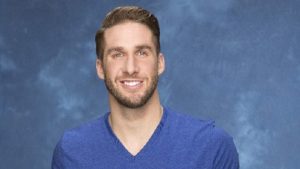 Ryan Gosling with a thyroid problem

Nick V. is a bad boy. He always has this expression on his face like he just walked by you in a bar and purposely brushed up against you with his crotch to see if you were interested. Nick also failed to find love in two appearances on Bachelor in Paradise, which is like saying you didn’t find love in the rest room at the OTB.

Tonight, Nick V. will meet his 30 girlfriends, make out with a bunch of them, defend himself from the onslaught of surprises thrown his way by ABC, and, God willing, learn to love. It’s the most important thing that has ever happened. It’s The Bachelor.

Before we meet the contestants or start actual content, ABC has Nick V. get together with three former Bachelors to make sure I’m suffering enough. Chris the Farmer, Ben and Sean sit down to give Nick V. advice on dating 30 women at once. It’s super insightful and romantic. I cry a bunch. Judging by my Twitter feed, one of the greatest Bowl games in history is happening on another channel. I hate the choices I’ve made. Sports quota filled.

Next, Nick V. puts on a shirt. Things are getting serious.

We get to see preview videos of some of the contestants. Rachel vacuums her apartment while a camera guy captures the moment. She also sits on a bench and thinks about love. Danielle does nails at her own nail salon. She also stands on beaches to think about love. Vanessa speaks French and does French things. She’s 100% Italian. Vanessa also sits by ponds to watch ducks and think about love. She is a special needs teacher. I have a special need to not be alive anymore. I wonder if Vanessa can help. Josephine talks to her cat and seals. She talks to seals, she doesn’t seal. It was a noun, not a verb. Keep up!

Next up, Chris Harrison welcomes Nick V. to the Bachelor mansion. It’s welcomey. I can’t believe this is happening. Nick V. tells Chris Harrison that he hopes to find love. You guys hoped Nick V. would find love too, admit it.

The girls arrive in their limos. I throw up because I’m nervous.

Danielle is first out. I didn’t recognize her at first because she wasn’t on a beach, thinking. Elizabeth is next. No, the other one. Elizabeth has a really thick accent. It’s accenty.

A girl named Kristen or Christen gets out of the limo and throws a glove or something. Ida Marie does a trust test. Olivia Eskimo kisses Nick. These girls are crazy. I yelled out, “How about Eski-No!”, but my wife wouldn’t high five me. You guys, I think my wife hates me.

Jasmine is next out of the limo. She brought Neil Lane with her because a leaking septic tank isn’t complete without maggots. I hope for a lot of things: an asteroid to hit the earth, a stray arrow to fly through my window and pierce both of my ear drums so I can’t hear, but the thing I hope most for in this world is for diamond whore Neil Lane to rape my eyes with his paid placement appearances on The Bachelor. It’s the cheap can of hot cheese on my arena nachos.

We’re one night in and there’s already drama. Apparently, Elizabeth (no, the other one!) met Nick V. at a wedding and they had the sex. Now, Nick V. doesn’t remember her. Upon learning this, Elizabeth does not maintain her dignity by immediately leaving the mansion. She sticks around to be on TV some more. I know when I go on a game show to find true love with a guy who had sex with me, and he doesn’t remember who I am, I’m always hopeful things will work out for the best.

ABC plays special music when Corrine gets out of the limo. That means she won’t get dumped for awhile. Corrine gives Nick V. a hug token. See, when I hand out hug tokens, everyone thinks it’s creepy. The world is not fair.

Raven literally teaches Nick. V how to do a pig cheer. It’s literally the worst thing that has ever happened to me. I literally want someone to cram a stick of dynamite down my throat and light it.

Josephine gives Nick a hot dog. Brittany is a Travel Nurse. Is that like a smaller nurse that fits into your suitcase better? I’m here all night.

Lacey arrives on a camel and says a “hump” joke. Then, ten seconds later, she makes the same hump joke to make sure we all heard the hump joke. Did you guys hear the hump joke? Asking for a friend.

Alexis gets out of the limo in a left shark costume. She is an aspiring dolphin trainer. I’m an aspiring drug overdoser. Talk about a growing industry. Could you imagine sending your kid to school to find out they want to train dolphins? Where does that take you? I used to hate delivering newspapers as a kid because the unending list of job postings for dolphin trainers would weigh down the newspaper something fierce. Dolphin training is a cutthroat field. Guys will spike your tuna bits with black pepper so the dolphins won’t listen to you. Grizzled veteran dolphin trainers will haze you by talking in dolphin in front of you before you learn the language. Also, why did Alexis wear a shark costume if she wants to train dolphins? Alexis makes dolphin noises. Why did you read down this far?

So, Nick now has 30 girlfriends. None of the girls are named Ashley/Ashleigh/ASHlee/AschLAY/AshlӚӚ. There’s an Astrid (I’ll bet she loved middle school), a Jaimi, 2 Jasmines and only one Lauren. ABC’s not even trying anymore. Most of these girls spell their name correctly. I literally hate this show.

Nick addresses his 30 girlfriends. He talks about how important it is to find “the one” while ABC plays super dramatic music, pretending like they’re promoting true love instead of soft core pornography.

Up next, everyone drinks and starts to fall in love. Nick dances with a super annoying girl whose name I can’t remember. I hate her, so she’ll last 8 weeks. Nick keeps telling the camera that he feels like he’s closer to finding the one. It’s been 20 minutes. How hasn’t he found the one yet? He sucks at finding the one. If you can’t find the one in 20 minutes, you don’t deserve the one.

Vanessa and Nick have a nice conversation, and just as he’s about to kiss her, Corrine interrupts. It’s super interupty. Corrine has already had time with Nick, but she doesn’t care. She grabs him and sucks on his face for 38 seconds. Yes, I timed it! The rest of the girls watch the kiss from the mansion. They already hate Corrine. You guys already hate Corrine too, admit it.

Back in the mansion, Corrine tells Sarah that she already kissed Nick and Sarah cheers for her. I know when my boyfriend makes out with one of his other 29 girlfriends, I’m super happy for that girl. You are definitely on TV to find true love when you root for other girls to make out with the boyfriend you just met.

Jasmine tries to talk to Nick V., but he’s already talking to another girl. Jasmine handles it well. She starts freaking out and crying. I can understand. She’s known Nick V. for 11 seconds, so anyone would be emotional.

Back in the mansion, the girls throw food in Alexis mouth. In case you forgot, Alexis is dressed as a shark, but thinks that she’s dressed as a dolphin because she’s insane. Alexis is a dolphin trainer and the future of our world. 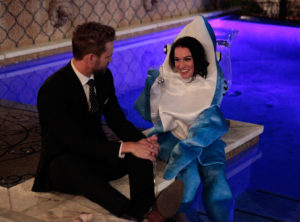 Nick and Alexis argue about whether or not she’s a dolphin. She’s kind of drunk, so I don’t hate her as much as I hate some of the other girls yet.

Elizabeth (the other one) talks to Nick and he remembers her. It’s either that or the producers told him that a woman he had sex with was going to be on the show. Liz (she’s Liz now) wouldn’t give Nick V. her number after they had sex. She wasn’t sure he was a nice guy. Nick V. tells Liz (she’s Liz now) that he is a good guy. There’s a bunch more talking.

Next, Nick V. talks to Danielle. ABC plays soft “She’s a nurse who saves babies” music when Danielle talks because she saves babies lives for a living. That’s a stupid job. She should train dolphins.

Nick V. gives his first impression rose to Rachel because she was super first impressioney. I don’t remember her at all, but Nick V. did. That’s probably more important. When Nick V. offers Rachel the rose, she says, “I 100% accept.” I like Rachel because that’s the maximum amount someone can accept something. She knows her fractions.

Just as the earth is about to explode from all the fun we’re having, Chris Harrison comes out to earn his money. He bangs his glass to announce that the party is over and it’s time for the rose ceremony. Nick must dump a bunch of his 30 girlfriends.

Nick V. does not dump the dolphin girl. He does not dump Brittany the travel nurse. It wouldn’t have been that big of a deal for her to go home. It’s her job. Five girlfriends go home. I don’t remember any of them.

The final rose of the night goes to Liz (she’s Liz now), the girl he slept with who wouldn’t give him her number. Well, Nick, you got her number now. Her number is 25, because she’s your 25th girlfriend.

So, there you have it. This is the exact same recap I’ve been writing for 14 years. There is literally no difference.