If you think you have bad luck, think of all the people who died this week without finding out which of Nick’s girlfriends were dumped and which made it to… 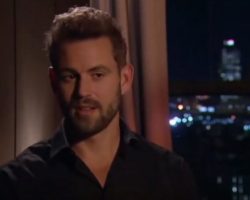 Nick Takes His Girlfriends To Finland To Have Sex with Them

If you think you have bad luck, think of all the people who died this week without finding out which of Nick’s girlfriends were dumped and which made it to the final 3. I picture a guy slipping and falling off of Machu Picchu, yelling out, “Who does Nick bang in the fantasy suite?!” Also, yes, all of my Bachelor recaps will now begin with a story about someone falling and yelling out. Keep up!

It’s still hometown date week. Last week was super hometowney, but we did not yet find out who Nick is bringing to a remote island to have sex in Fantasy Suites. Well, hopefully we’ll find out tonight. When we last left Nick, he was being visited by former Bachelorette trash bag Andi Dorfmann. Nick is super confused. He can’t believe Andi just showed up at his hotel, even though he was told by producers that it would happen because this is all scripted.

Andi comes in to Nick’s room and tells him that he better pour some whiskey because she has a bomb to drop. Well, holy hell, y’all, ‘bout time someone dropped a bomb! I was so sick and tired of all the non-bomb-dropping going on.

Andi commences bomb droppage. She tells Nick that she wants to know what he’s thinking. This bomb is lit. It’s so bombey! I’m yell out “Snap!” and high-five my wife. We’re best friends.

Back to the bombs. Keep up! Nick drops his own bomb. Andi points out how he’s dumping 29 women and Nick says, “Maybe 30.” I scream. My wife runs out of the room and throws up. Down the street, we hear our neighbors throw furniture through the window. Nick just admitted that he might dump all of his girlfriends and that he won’t just get engaged to someone because they won the gameshow. Wow. Nick is such a good guy. I was all wrong about him. He’s super integrityey.

The stupid, pointless conversation continues. Andi tells Nick that he should have sex with his girlfriends in the Fantasy Suite if he wants to. Andi is so wise. There’s so much wisdom flying around on this show. I feel wiser. You guys feel wiser too, admit it. Also, my wife tells me that she likes Andi’s shoes. We’re probably getting a divorce now.

The rose ceremony is next. Guys, we’re only 5 minutes in and so much has happened. If another bomb gets dropped, I might swallow my tongue.

Nick’s four remaining girlfriends, Corinne, Rachel, the woman from that small town and the other one line up, waiting to be dumped. Nick gives his girlfriends a speech, thanking them for giving him the opportunity to get to know them and dump them. Then, he dumps Corinne. Boom! Corinne is gone!

I’ll miss Corinne. I’ll miss the way her voice made me feel like a dirty, 90-year old man was licking the inside of my ear. Every time I hear an animal in pain or a piece of sheet metal dragged across concrete, I’ll think of Corinne and smile.

Corinne cries a lot. I would have enjoyed it if the tears were real or if she was capable of human emotion. We are forced to watch the worst acting since every Keanu Reeves movie. Corinne is a human rash. She’s like if Martin Shkreli and a tape worm had a baby. I hate her more than the Boston Bruins. (sports quota filled) I’d rather have sex with a burning wasps nest. So, anyway, Corinne is gone.

Nick shakes off the fake dumping of his fake girlfriend and takes the other three to Finland. He says that he couldn’t imagine a more magical place for this journey to end. So, Nick has no imagination. Usually, the Bachelor gets to have sex with his girlfriends in a tropical location. Instead, Nick is forced to walk around in the snow to talk about and think about his girlfriends. There’s a ton of snow and moose. Mooses? Meese? Many moose. There are a ton of mooses. ABC shows us the mooses.

Raven gets the first date. Nick and Raven jump into A HELICOPTER!!! Raven is super excited because, where she comes from, there are no helicopters. Hoxie doesn’t even have moose, or air or a Home Depot, just faith, family and football.

The helicopter flies around. We watch it. Look, ducks! ABC shows us ducks. Nick and Raven make out in the helicopter. What are we doing with our lives? No one should suffer like this.

The helicopter lands. This is all happening at break-neck speed. I can’t handle. Nick and Raven go to a bar to play darts. I’m not sure if Finland uses the same darts rules as in the States, so I can’t critique Nick’s method. Some Finnish locals play darts with Nick and Raven. This is so much fun. I hardly want to get into my car, pull it into the garage, close the garage door and leave it running.

Nick and Raven talk about her family. Raven admits that she can’t cook. Nick admits that he hates folding clothes. There’s a 2-minute conversation about ironing creases in pants. I’m going to print out this recap and bury it in a Folger’s can so future generations can learn how stupid we are.

Raven is nervous because she hasn’t told Nick she loves him yet. She’s loved him for, like, 3 days and she’s been holding it all inside. That’s not healthy. She’ll probably have a stroke or something.

Raven is also nervous because she knows that ABC is going to pressure her into having sex with Nick. She tells the camera that she’s only had sex with one man and also she’s never had an orgasm before. It’s an unexpected announcement. I hope her ex-boyfriend DVR’d this. I also hope her ex-boyfriend is watching with his current girlfriend. That would be a fun conversation.

Nick and Raven go to a cabin. I’m guessing Finland has a ton of cabins. Bachelor interns have lit 11,000 candles in the cabin to set the mood. I hope that ABC has invented some kind of device that lights multiple candles at once. Maybe they get to use a blow torch? There’s no time to think about it because Raven is talking to Nick about love. It’s important.

Raven has never told anyone she loved them. I tell cashiers I love them. Raven tells Nick she didn’t love her ex-boyfriend. She’s beating around the bush and won’t tell Nick she loves him. Why is she stalling? She’s going to blow it! What if the moose storm into the cabin and kill them both? Then, Nick will never know Raven loves him! Raven is an idiot! 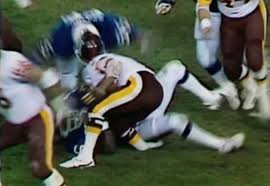 After 9 minutes of rambling about comfort, and a 2-minute crying break, Raven finally tells Nick that she loves him. ABC plays soft ‘Raven is finally telling Nick she loves him’ music. This was more painful to watch than the Joe Theisman injury. Two sports references!!! You could really feel the love from Raven. I hope the 2 sweaty camera guys standing right next to Raven as she professed her love could really feel it too.

Nick thanks Raven for her love. He is not allowed to tell Raven that he loves her because this is a game show, not a relationship.

Raven opens the Fantasy Suite invitation. Chris Harrison invites Raven to have sex with Nick. She accepts. She then tells Nick that she’s only had sex with one man and that that man did not bring her to orgasm. This girl does not mince words. Well, when you only know, like, 14 words, it’s hard to mince them. I’ve tripped over cardboard boxes with more intelligence than Raven. Nick takes the orgasm comment in stride. He tells the camera that he might not have sex with his three girlfriends. Yeah, right, Nick.

Nick and Raven go to their Fantasy Suite and they have sex. As we go to commercial, ABC shows the Northern lights. They aren’t the real Northern Lights. ABC added them in post because they’re monsters.

Next, the show ends. Whoa. Tonight’s episode is only an hour. I had no idea. It’s the greatest gift I’ve ever been given. It’s better than the time my wife got me a rice cooker. The bad news is, next week’s show is 3 hours long. I’ll need to stop at Consumers. And that episode will be followed by the 3-hour finale in two weeks. So, six more hours of The Bachelor to go! I can practically smell my freedom. It smells like a vagine!