What the hell is the deal with First Niagara Bank’s advertising campaign?

Ads can suck in so many different ways. They can be grating. They can insult us by pretending we care about what a company is selling as much as they do. They can misunderstand what we want or need. And they can simply not be true. This radio spot from First Niagara effortlessly combines all these, and more:

“I’m John Koelmel, President and CEO of First Niagara.  The long wait is finally over.  We now have more than 200 branches across New York State to make it even easier for you to bank with us and we’re very excited to welcome 1,200 new teammates to the First Niagara family.  Not only will we have a bigger and better team working for you, but we’re also retaining important jobs in each of our communities and that means there will be more of us working even harder to bring that passionate First Niagara service and commitment to all of our customers and communities, new and old.  You can always count on us to make good things happen and empower you to thrive.  We’re ready to rock and roll, Buffalo and Western New York, and it’s going to be something really special.”

Do you know when I want to hear from a bank? Never.

Banks are like hot water heaters; we replace them when there’s a problem. The fact that I even have to hear from you makes me think there’s a problem. It feels like you’re trying to “get ahead” of something, like when my wife calls me to say that everything is all right. I know that it’s not your fault that you’re a bank, but that’s the reality. Bottom line: I don’t want to hear from a bank. Ever. 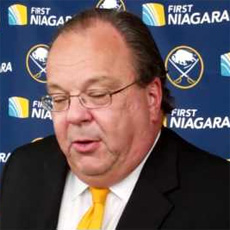 By the way Koelmel, we blame you and your stupid bank name for ruining the atmosphere in our hockey arena too.

What the… is that your real voice, John? If so, maybe it should have dawned on you sometime in the last 50+ years that you’re not the ideal candidate for delivering a radio message.

I get that you’re a bank President and freaking CEO. But that does not suddenly imbue you with a winning ease and charm, in the same way that becoming a weatherman does not imbue one with the skills to perform bypass surgery. Frankly, you sound like you’re delivering this message while pulling 4G’s from the back seat of a fighter jet. The fact that you appear oblivious to how you come off tells me that you have surrounded yourself with people who are afraid to tell you the truth. And somebody should have told you by now that there’s something downright scary about your vocal delivery.

Here’s another tip — Buffalo is a blue collar town. When someone tells me they’re “President AND…” I immediately replace whatever word they’re going to say next with “…Dbag.” It’s like saying “Ruler AND Overlord” — we get it, you’re in charge — the “Overlord” part just seems like piling on.

Problem #3 – Did we really ask for this?

“The long wait is finally over. We now have more than 200 branches across New York State…”

Long wait? Long wait? Buffalo is waiting for many things. We want a better-functioning government, we want less infighting, a new bridge, and most of all we want a major sports championship. But even if we were to make a list of 10,000 things we kind of want and are still waiting for, nowhere on that list would we write down “200 branches for First Niagara!” Get over yourself.

“…to make it even easier for you to bank with us …”

Easier? Seriously? You know what WAS easy? Me coexisting with my previous bank, where we had established the ground rules (they take some of my money on a regular basis, and they never, ever contacted me). Do you know what was not easy? The transition to First Niagara, which included having to do the following:

After the necessary and meaningless filler section about jobs, empowerment, and commitment, the ad wraps up by saying,

“We’re ready to rock and roll, Buffalo and Western New York, and it’s going to be something really special.”

Rock and roll? Rock and roll is about sticking it to the man, breaking the rules, and taking risks. Running a bank is about carrying the two, calculating compound interest, and not contacting me. Isn’t it enough that we passively endure your growing pains with you? Do you also insist that we imagine each new branch cranking up the Van Halen, trashing the lobby, and setting fire to the ATM’s?

If you enjoyed this, please take a moment to share this post with your social networks to help us spread the bad word.

And below is the audio clip of this commercial just in case you want to have another listen to the radio advertising gold.