Face it. Your league is boring. 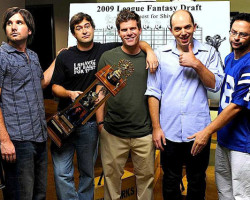 3 Ways To Breathe Life Back Into Your Fantasy Football League 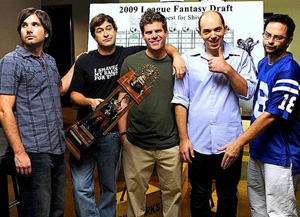 With about 3 months until kickoff, now is the time to start the conversation about rules changes to improve and break the monotony of your league.

Here’s an article from Dave Richard at CBS Sports full of suggestions worthy of consideration.

Read the full article but these 3 should be enough to break you from the status quo.

With a draft, you’re wedged into specific picks and might not have a chance to get an elite player without the luck of a random order generator (or if you sucked last year). Or you might get the opportunity to take two players at a time while waiting for the rest of your league to pick up 20-plus players in between. In an auction, you have the chance to get anyone. There are also more “bargains” in an auction because owners inherently throw around their money early and leave good players to be had for a discount. If you’re smart, you can build a better team via an auction than in a snake draft.

It’s the best part of the FF season but the majority of leagues aren’t even maximizing the enjoyment of draft day. Once you try an auction, a traditional snake draft suddenly holds all the intrigue of a game of tic-tac-toe. Among other things, an auction draft forces you to devise (or perhaps develop on-the-spot) an actual strategy for building your team. Want Adrian Peterson AND Arian Foster? Go for it. You can literally decide “I’m getting Player X no matter what”– and then get him! You might ruin your team’s chances of success by doing so but hey, that’s the chance you’re taking. An auction draft is INFINITELY more fun and interesting than what you’re used to– can’t recommend it highly enough.

Win (or lose) twice in one week

Ever score enough to beat most of the other people in your league but fall short against the one guy in the league who went off for a bazillion points? Or, ever score the second-most points over the course of the season but not make the playoffs? In this concept you’ll play your standard head-to-head matchup for one win but also claim a win if your score is in the top half of your league. A successful team will go 2-0 in a week with a win over one opponent and a top-half overall point total. Conversely, if you score very few points in a week and lose your head-to-head matchup, you go 0-2 for the week.

The best feature of this rule change is that good teams can lose their head-to-head matchup and still get a win for having a productive starting unit. Plus, it’s conceivable that a team sitting at .500 with three weeks to play could make a playoff run. And more wins means fewer ties in the standings come the postseason. And if winning is fun, why not allow for more of it?

The “I would’ve beaten anyone else in the league except the team I played this week” phenomenon sucks. There’s nothing you can do to gameplan against the team you’re facing so the difference between winning and losing is very much determined by luck of the draw. Everyone likes having a weekly opponent so you don’t want to wipe out the head-to-head element completely. Putting one win on the table for your game and another for how your weekly total compare to everyone else seems like a perfect compromise. (Drastic alternative– Want your standings to be 100% merit-based? Play against every team, every week.)

If you’re bored with kickers, lump them in with DSTs. It saves a roster spot and it makes choosing a DST more intriguing, if not vitally important to get correct. If a kicker nails three field goals and some extra points and you add those stats to a good defensive unit, you’ll total more points than pretty much everyone in a standard league. Likewise, if you start a K/DST that’s on the wrong end of a shutout, you’re in big trouble.

Most league sites don’t have the option to combine the two, so it will take honesty from every owner to add/drop the appropriate kickers that play with their DST(s). Maybe there’s a penalty for the unsavory owner who hogs a kicker that belongs with someone else’s DST.

Software issues aside, who would vote against this? Nobody cares about kickers– but they score points, so we need them. Lump them in with the defense and special teams and let’s get on with our lives.