Ah, the bye week. A time for both players and fans to rest up and recharge; a time to step away and clear the mind. Unless, of course, you are affiliated with the Buffalo Bills. 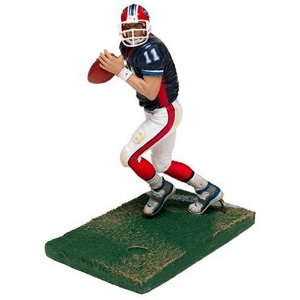 Ah, the bye week. A time for both players and fans to rest up and recharge; a time to step away and clear the mind. Unless, of course, you are affiliated with the Buffalo Bills. In that case, your bye week is dominated by talk of the tender wrist of your multimillion dollar free agent, a drawing of a waterfront stadium that costs $1.4 billion, and a proposal to move the team to freaking Hamilton. Oh, and you have an extra week to think about the fun loss to the Titans.

Remarkably, Sunday’s soulcrusher wasn’t even the worst in recent Bills’ history directly before a bye week. The team has an unusual habit of turning in massive stinkers just before the week off, giving us all a little extra time to wallow.

I present to you, the top (bottom?) five bye weeks of the last 20 years:

1992 – Week 7 – Preceded by: Raiders 20 Bills 3 – The most disappointing son in the world, Todd Marinovich, threw for 188 yards and 2 touchdowns in a dominating win over Buffalo at L.A. Memorial Coliseum. The Bills responded by winning five straight and going to their third consecutive Super Bowl. So, you know, things mostly worked out.

Had we known about the pegs in Bledsoe’s heels at the time, we probably would’ve lowered our expectations.

2002 – Week 10 – Preceded by: Patriots 38 Bills 7 – If you had to pinpoint an exact beginning to the Pats’ dominance over the Bills, you could start here. Coming off its improbable Super Bowl win over the Rams, New England was floating back down to earth, entering this game in Orchard Park with a 3-4 record while Buffalo was 5-3. Drew Bledsoe had a chance to vanquish his former mates, prove the not-yet genius Belichick wrong, and put the 2002 Pats away. Well, that didn’t happen and the rest is history. The team came back from the bye with a pair of uninspiring losses, seemingly as bummed out as the fans were, and missed out on the playoffs with an 8-8 record.

2005 – Week 9 – Preceded by Patriots 21 Bills 16 – Ah, the Patriots again. The Bills turned in a decent effort in this Sunday night game at Foxboro on Halloween, but coughed up a 16-7 lead in the final quarter. New England pounced a late fumble courtesy of Kelly Holcomb and…tell you what, I’ll just stop there.

2007 – Week 6 – Preceded by: Cowboys 25 Bills 24 – Celebrating their first MNF appearance in 13 years, Bills fans turned the Ralph into a raucous nationally-televised party and the team responded – for about the first 55 minutes. Two defensive touchdowns, a special teams touchdown, a fake punt, and five picks of Tony Romo somehow equated a last-second Dallas victory. With a 1-4 record at that point, Buffalo came back strong after the bye winning four straight, but ultimately finished with their unofficial record of the decade: 7-9.