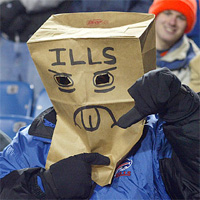 Grooming the next generation of Bills fans.

Young fan with the message of the day twitter.com/hsimon62/statu…

One of the four accounts has trouble with numbers. #BERLS twitter.com/TheDefenseman/…

overheard in the press box: “the awfulness is just unbelievable.” #nyj #bills

The best I can say is we’re playing the Bills, so we still have a chance to win!

We all hate Brad Smith’s face

Refrained from yaking all day Saturday. Brad Smith brought it all right back. Gross.

Sal and I agree, if this game meant anything, you’d be convinced that the Bills would find a way to lose it.