On March 14th, in the wake of Michael Vick’s sudden availability, Bills GM Doug Whaley was asked whether the Bills were looking to add to their depth at the QB… 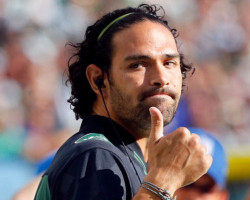 A Reasonable Case For Mark Sanchez to Buffalo

On March 14th, in the wake of Michael Vick’s sudden availability, Bills GM Doug Whaley was asked whether the Bills were looking to add to their depth at the QB position.

Whaley went on to say that he feels good about the current QBs on the roster.

“Comfortable. Very comfortable,” he said. “And what you gotta understand is, you got all those guys are going to be in another year in this system. So if you bring someone else in, that’s going to be their first year in the system. We’re comfortable with where we are at the quarterback position.”

Translation: “If I tell you I’m uncomfortable, I just wrote a headline for you. I’m no fool. It’s March 14th and we don’t play a game until September. So yeah, right now, we’re… comfortable.”

Even if you believe (as I do) that EJ Manuel has a decent chance to be the long-term solution, this team still needs a viable backup.

Last season, the Bills wanted a veteran QB on their roster to go with their rookie. They tried but Kevin Kolb broke before he could be useful.

In his first NFL season, Manuel played just 10 of 16 games and missed three separate blocks of time (including preseason) due to injury.

As a result of facts 1 and 2, Thad Lewis played. When he couldn’t go, Jeff Tuel played.

I don’t dispute any of what’s already been written about Sanchez here at TB. In fact, I’d like to add to it.

With Ryan Fitzpatrick (and Vick and Schaub) off the table , Sanchez looks like an incredibly viable option– not to compete with EJ Manuel but to back him up.