Yes, the quote is taken slightly out of context BUT… can you remember the last time you read similar words from a national writer with the credentials of Peter King… 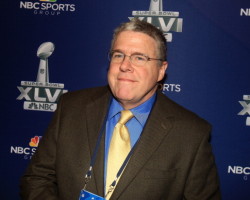 Yes, the quote is taken slightly out of context BUT… can you remember the last time you read similar words from a national writer with the credentials of Peter King (or really from anyone)?

SI’s King hit up Bills camp for the team’s first two practices. You can read his full report here.

Here’s the full quote referenced in the headline:

I’ve been coming to see the Bills in camp most years since the glory ones. And this is probably the best supporting cast the team has had in a decade. Driving away, I’m thinking: If Manuel and Dareus play to their abilities, the Bills should win 10 for the first time this century.

But those, of course, are very big ifs.

Pro Football Focus had a great stat about Manuel—he led all quarterbacks in the NFL last year in percentage of total passes attempted to running backs. That means he’s probably checking down too much. I saw that Sunday night. Particularly with Watkins, who is showing signs of being excellent at beating the jam at the line, Manuel is going to have to have faith in his ability to find receivers down the field in competitive coverage.

He’s not physically imposing when you’re next to him, but his advantage, from the looks of two practices, is he plays with equal physicality and quickness. Watching him get off the line of scrimmaging against corners trying to test the kid is a treat.

Anyway, on Sunday night, his line group left one area of the field to work on hand-to-hand drills, one lineman versus the other, and when the group got to the corner of the field for the drill, there was a blocking sled there. “That damn thing’s in the way,’’ Johnson said, annoyed. Without anything else being said, Kyle Williams went over to the sled and pushed it 20 yards down the field. Boss man said something’s in the way, so move it.