This morning on WGR550, Howard Simon and Jeremy White spoke with Sabres Director of Amateur Scouting Kevin Devine to talk about the Sabres’ plans for the upcoming draft.

Here are some highlights from the interview which can be heard in it’s entirety at wgr550.com.

Q: How much of a goal is it for the team to move up in the draft?

DEVINE: I think like a lot of teams we’d like to move up and draft probably from both positions but realistically other teams are trying to do the same things. We’re going to look at all the options and see if that’s a viable thing to do.  We believe right now at 8 and 16 we’re going to get two good players and we’ll see if the other things make sense.

Q: Who’s the best player available, who would you pick first overall? 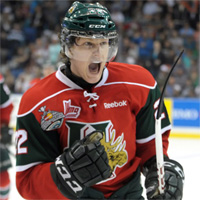 DEVINE: It’s either Jones or MacKinnon I really don’t want to say. We’ve had conversations with a lot of teams including Colorado. I do think there’ll be some movement in those picks. But it will be one of those two guys, I’ll let you have that.

Q: You said you’ve had conversations with Colorado?

DEVINE: We have had conversations with Colorado. I think you know there’s been a regime change there as everybody knows in the last three weeks. And I think they’re trying to figure out themselves what’s happening there. I believe they’re having internal meetings there this week and we’ll probably get back to them at some point. We’re waiting for a call back to find out what their position is.

Q: Waiting to hear back if they’re willing or find out what the price is?

DEVINE: Probably both. We’re exploring everything. I think Darcy has talked to every non-playoff team and as soon as teams get out of the playoffs, Darcy makes a pretty quick call. So, obviously, we’ve talked to all the teams in front of us and trying to gauge exactly where they’re at with moving their pick.

Q: How serious do you think Colorado or Florida are in moving their pick or are they just messing around?

DEVINE: I think it’s how far they want to move back. And you take the situation in Colorado and where there’s a new regime in there with Joe Sakic and Patrick Roy. I don’t think Patrick came in there with the idea of a long rebuild. So I think they might be willing to listen to a few things. And like I said, with it being a deep draft and there being all kinds of different options with different kinds of players.. defense, gritty forwards, skilled forwards, there’s all kinds of options. We don’t exactly know what teams are thinking in front of us, but it keeps our options open.

Q: How many different scenarios have been talked about in moving up?

DEVINE: That was the basis of our meetings over the past week and a lot of the conversation over two days. What would it take to get this pick? What would it take to get that pick? Is that going to be something we’re willing to do?  The preliminary talks are that everybody’s talking about our young players to move up. So we’ve got to decide if it makes sense to move some of those players to move up? So it’s a difficult conversation, but if you’re really honed in on one guy and he can be a franchise changer then you have to look at it.

So the Sabres have their eyes set on Nathan MacKinnon, right?

So what might it take to reel in that 1st pick?

@trendingbuffalo Oof…that feels like a lot.But, that’s exactly the sentence you need to say to yourself to make a really bold trade.