Trying to believe but coming up empty. 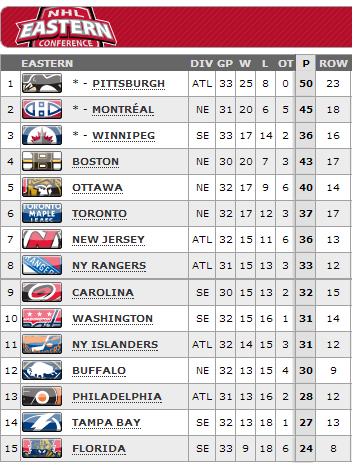 I tend to be a “glass half full” guy (to a fault) so “3 straight wins and 3 points behind a playoff spot with 16 games to go” usually sounds OK to me.

Then why doesn’t this feel like anything at all?

Let’s dig through some numbers and try to get to the bottom of this malaise.

Why can’t a guy who always has hope grab onto anything right now?

>The 3 wins each came by a one goal margin, including one in OT and one in a shootout.

>It’s Buffalo’s second 3 game winning streak of the season. The previous one also featured all one goal games including TWO shootouts.

>This sure does look a lot like a phenomenon commonly known as regression toward the mean.

>Again without shootouts, they’ve been outscored 17 times and outscored by more than one goal 8 times.

>With the quirks of this year’s schedule, every opponent is fighting to get into the playoffs from the same pool of Eastern Conference clubs. This makes it vitally important not only to gain points in the standings but also to prevent the other team from doing so, a feat the Sabres have accomplished only 8 times (by virtue of 8 regulation wins.)

>Meanwhile, they’ve come away from a game empty-handed 15 times themselves.

Mathematically, making up the ground necessary to get to the postseason is certainly feasible. It’s too bad there’s nothing to indicate that this present team is capable of getting it done.