Consensus: No NHL Until December

They’ll eventually figure it out, but the question is… when?

Below is a compilation of opinions from NHL experts and analysts (and it doesn’t look pretty.) 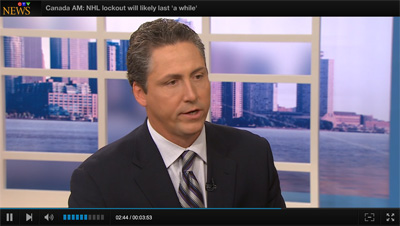 Sam Carchidi from the Philadelphia Inquirer says both sides seem ready for a long, drawn-out battle.

“Neither side is willing to make a bigger compromise on the main issues – how to divide hockey-related revenue (HRR), and how to help the small-market teams through increased revenue sharing.”

It’s one of the cardinal rules of business: the contingency plan.  When conditions change, be ready to adapt. For the NHL’s 30 clubs, contingency time is here, or very close, which doesn’t bode well for the hope of a brief lockout. Naturally, the financially weaker franchises are moving the quickest.

The players won’t feel any pressure to settle in October since they will be receiving money through escrow payments which is money that was held back last season. But come November and December when players will have missed four to six paychecks, the dynamics will change and some internal pressure will begin to mount inside the association.

Harvey Fialkov from the Florida Sun Sentinel thinks we’ll be waiting until at least Thanksgiving.

Despite league revenue soaring from $2 billion to $3.3 billion since the last CBA was signed following the 2004-05 season-long lockout and the salary cap going from $39 to $70 million, NHL Commissioner Gary Bettman still wants to slice the player’s revenue from 57 percent to 47.

A record 10-year TV deal with NBC. Seven different Stanley Cup champs in seven years. The Wild hands out two $90 million contracts. All that prosperity, but with the NFL dominating the fall and NBA gearing up, don’t expect hockey until you’re carving turkey.

The “NHL lockout: What you need to know” feature in The Boston Globe states the Winter Classic might be the key.

There’s no telling when this might end, but a settlement that would allow a midseason start figures to be a goal. The Winter Classic between the Detroit Red Wings and Toronto Maple Leafs is scheduled for Jan. 1. Last season’s Winter Classic averaged 3.74 million viewers on NBC and was the fifth-most watched regular-season NHL game in 37 years.

Chris Kuc of the Chicago Tribune also thinks the Winter Classic payday is too much for NHL owners to give up.

A debate rages between the optimistic side of me (rarely used) and the pessimistic side (hello, old friend) when it comes to the NHL lockout. I’d say cooler heads will eventually prevail, but neither side is looking particularly frosty at this point.

So I’m putting the over/under on the end of the lockout at Dec. 1. It’s right around then that many of the players will realize they haven’t received a paycheck in a while and the league will start eyeballing the possibility of losing the big-time payday of the Winter Classic on Jan. 1 at cavernous Michigan Stadium.

Like everything else that has gone on at the negotiating table thus far between the NHL and players’ union, money will be the determining factor when it comes time to get back to work.

Helene Elliott from the Los Angeles Times agrees that this year’s Winter Classic is too big a showcase for even the NHL to mess up.

It will end in time for the Winter Classic to be played New Year’s Day at Michigan Stadium, because that’s too big a showcase for even the NHL to mess up. It will end just before Kings fans become convinced that last season was a dream and they’re all going to wake up and see Roman Cechmanek in goal and Dan Cloutier backing him up. Please, let it end before that happens.

And what do the fans think? More than 48,000 fans voted on ESPN SportsNation and almost half think the season is doomed. 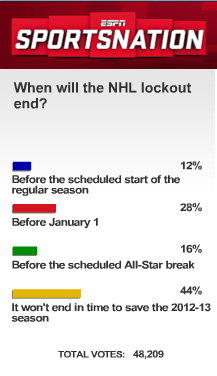