This is Part 3 of a Trending Buffalo series in which we simulate the entire 2012 Bills season using Madden 13.  Part 1  Part 2 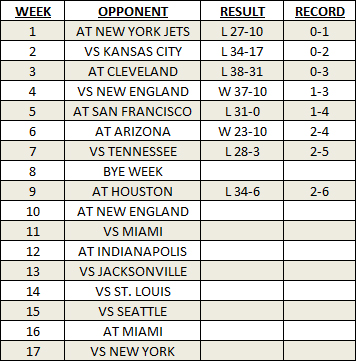 Ryan Fitzpatrick is re-installed as the starting QB and the Bills’ 32nd-ranked offensive unit opens with a promising drive that ends with a Fred Jackson fumble.  Tom Brady hits Rob Gronkowski for a 1 yard TD pass.  Following a Buffalo three-and-out, the Patriots escape a 3rd and 17 situation thanks to a fifteen yard penalty against Marcell Dareus.  Shane Vereen punches it in from the 1 to give the Pats a 14-0 lead.  A Rian Lindell field goal gets the Bills on the board just before the half.  The Patriots kick three second half field goals.  The Bills do nothing of the sort.  Patriots 23, Bills 3.

The Bills turn to Tarvaris Jackson at QB for the second time this season.  Buffalo picks up 3 first downs on the opening drive but punt it away and pin the Dolphins at their own 11 yard line.  On Miami’s first play from scrimmage, Reggie Bush takes it to the house.  Whoops.  Rian Lindell hits from 42 yards as time expires in the 2nd quarter.  7-3 Miami at the half.  A 58 yard pass from David Garrard to Brian Hartline makes it 14-3.  The Dolphins block a Lindell field goal attempt and follow it up with a 78 TD run from Reggie Bush.  Tarvaris Jackson finds Scott Chandler for two late touchdowns is too little, but it’s too late for the Bills.  Miami 24, Buffalo 17.

Tarvaris Jackson and Stevie Johnson hook up on an 80 yard strike to give Buffalo an early lead.  Andrew Luck counters with a 46 yarder to Mewelde Moore.  Fred Jackson answers with a 28 yard TD run that puts the Bills up 14-7.  Buffalo looks to add to the lead in the final minute of the half but Vontae Davis intercepts Jackson’s pass at the Colts’ 27.  Andrew Luck’s 2nd TD of the game is a 36 yard hookup with Delonte Carter to tie it up at 14.  Facing 3rd and 13, Fred Jackson turns a draw play into a 53 yard TD to put Buffalo ahead 21-14.  Kelvin Sheppard seals the deal with a late interception at the Bills 18.  BUFFALO 21, INDIANAPOLIS 14.

If the season ended today,  the Bills (3-8-1) would hold the 3rd overall draft pick, behind the Bengals (3-9) and Rams (3-9.)  Ties really do suck, don’t they?  On a positive note, Kyle Williams would be tied for second in the league with 9 sacks.  On an even more positive note, we wouldn’t have to simulate four more of these games. 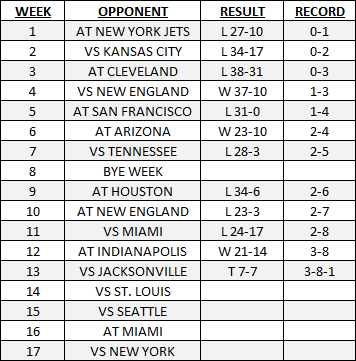