The days and nights are getting cooler. The flannel sheets are in the dryer. While Western New York pulls musty ‘Buff State’ sweatshirts out of dressers in spare bedrooms, I… 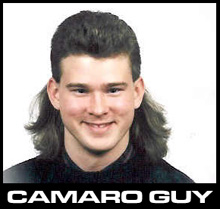 The days and nights are getting cooler. The flannel sheets are in the dryer. While Western New York pulls musty ‘Buff State’ sweatshirts out of dressers in spare bedrooms, I take a deep breath and appreciate the fact that I can now close the windows in my house.

It was a tough summer. My wife almost left me for that guy in the Camaro who flies up and down our street at 100 miles per hour, blasting music.

A couple of times, when the roar of Camaro guy’s engine filled our house like a bottle of Spanish Fly in the Prom punch, I had to hold her down so she didn’t run out the door after him. I don’t blame her. The guy’s car goes so fast. He obviously has a giant penis. With the windows closed and soon sealed with plastic, it’ll muffle his motor and, hopefully, calm her primal need to be ravaged by a dominant male.

I keep telling my wife, “He’s gone! You’ll never catch him! He can’t be tamed!” She just squirms and moans and claws at her chest.

I can’t really be mad at Camaro guy either. I only wish he knew what he was doing to our marriage. I can’t compete with him. My car can only go 70, tops. And I have all of this stupid respect for my fellow man, not wanting to risk their lives, and the lives of their children and pets. I certainly wouldn’t think that the entire neighborhood would want to hear my Nickleback tape so bad that I would need to blare it at ungodly levels. Luckily, this guy knows better.

I would want to have sex with Camaro guy if I were a woman, not that any woman really has a choice. He is the greatest. I wonder if I’ll ever be invited over to his driveway to stand around and look at his engine. I wonder if he’ll ever let me ride shotgun on one of his legendary odysseys. I would look over and say, “Are you going to press the gas, Camaro guy?” and he would say, “I don’t press the gas, I beat the shit out of it!” and then he would. He would beat the shit out of it.

Alas, the Camaro will soon go into storage. Camaro guy may be the last true gunslinger of this Earth, unafraid of laws and untouched by the desire to be decent, but he is not immune to winter. Salt ruins Camaros. Salt is weak. Camaro guy hates salt. If only Camaro guy could move to Miami. It’s probably expensive to do so. He could sell his Camaro. It would be like ‘The Gift of the Magi.’

So, Western New York, as you put your oscillating fans into storage and pull out your comfy socks, take extra comfort knowing that my marriage is safe for another 6 months. Every time the heater kicks on, I know the room is being warmed but temptation is being cooled.