#455830080 / gettyimages.com QB Jameis Winston- Florida State- suspended for Clemson game. Standing in the union and yelling something stupid in itself doesn’t hurt his draft stock. At steady stream… 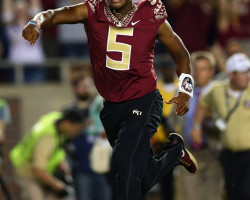 Jameis Winston- Florida State- suspended for Clemson game. Standing in the union and yelling something stupid in itself doesn’t hurt his draft stock. At steady stream of incidents that continue to show he doesn’t get it in a NFL world where teams are going to have to separate themselves from character issues does hurt his stock. These incidents show me he’s more of a follower than a leader.

Marcus Mariota- Oregon– has only 10 picks in 817 career pass attempts. Stat geeks say that’s the lowest interception ratio in NCAA history. Still tough to figure out as pro prospect, his receivers are always so wide open.

Shane Carden- East Carolina– an under-rated prospect coming into the season carved up a good Virginia Tech secondary for 427 yards and ran in the winning score in an upset in Blacksburg. Virginia Tech had highly rated corners in Kendall Fuller and Brandon Facyson. Hokies had to bench Facyson at one point because of being abused. First time someone has thrown for over 400 yards vs VT since 2002. Blistered UNC for 70 points.

Gunner Kiel- Cincinnati- throws six touchdown passes in his college football debut against Toledo. This after Coach Tommy Tuberville called him a ‘myth’. Kiel didn’t stick it out at Notre Dame or LSU so some execs wonder if the NFL will be too big for him. Followed up with so-so performance against Miami-Ohio.

Tevin Coleman- Indiana- impressed me in a loss to Bowling Green. He rushed for 190 yards and looks a lot like Darren McFadden in his running style. He had 132 yards in upset win over Missouri.

Justin Hardy- East Carolina– only had 47 yards receiving in upset win over Virginia Tech. He’s an effective small Justin Edelmann type receiver in the NFL. Caught 6 passes for 92 yards as ECU put up 70 on UNC.

Nelson Spruce- Colorado- started off the season as hot as any receiver in the country with 37 catches for 518 yards and 7TD’s in just four games.

Corey Robinson- South Carolina– he had a dominate game against Georgia. The Gamecocks always seemed to run to his side when needing a big play. He handled Georgia OLB Leonard Floyd well in pass protection.

Cedric Ogbuehi- Texas A&M- his toughest competition of the year may come in practice against freshman Myles Garrett.  Garrett should break the SEC record for sacks for a freshman held by Jadeveon Clowney.

Cameron Erving- Florida State- was made to look bad on several occasions going one on one with Vic Beasley of Clemson. Beasley look too fast for him around the edge.

Hau’oil Kikaha- Washington- uses his hands very well as an edge rusher. This is usually something that needs work in the NFL level. He’s ahead of the game in that area.

Marcus Golden- Missouri– next in line for Missouri d-lineman. Aldon Smith, Sheldon Richardson, Kony Ealy all impact picks the last three years. He’s 6-3 260 lbs about the same size as Micheal Sam. He’s faster than Sam to me. Created havoc in the Central Florida game. He missed the Indiana game with a hamstring injury.

Dante Fowler- Florida- can put hand on the ground or could play OLB and cover someone. Number one recruit coming out of high school has lived up to the hype. He’s one of the best defensive players in the country. He had two fumbles recoveries in Alabama loss.

Randy Gregory- Nebraska– to me gets lost at times in games. Not consistent. That being said he a solid performance all night against Fresno State and Miami.

Noah Spence Ohio State– failed a second drug test since December. He has good first step quickness but character issues will drop him to third or fourth round.

Devonte Fields- (formerly of) TCU- reportedly told coaches this week he will return to Division I college and not go to the 2015 NFL draft.

Grady Jerrett- Clemson-NFC scout said: “ he’s undersized but disruptive. He could be this years Aaron Donald. Only 6’1 295. He was a force all night causing havoc in the middle of the Florida State offensive line.

Danny Shelton- Washington– not impressed doesn’t gain enough ground. If not doing it in college won’t happen on Sundays.

Eric Striker- Oklahoma– plays big in big games. Had three sacks in Bowl game last year vs Alabama. Was a terror all night on national TV vs Tennessee.  Showed he could rush the passer or cover RB’s well.  He’s only 6’ 218 so not sure where NFL teams think he can play.

Caleb Azbike- Vanderbilt– looks like a OLB in a 3-4 as a pass rushing specialist. Four sacks on the season after sitting out the first game.

Vic Beasley- Clemson– Received a second round grade last year from scouts so stayed another year at Clemson. See teams scheming more against him this year. He’s facing more double teams. Numbers could be done this year but don’t be down on the player. Very confident player that said he was a better prospect than Jadeveon Clowney was last year. Beat Erving bad in FSU game.

Vernon Hargreaves III- Florida- abused by Amari Cooper in the Alabama game. Not all but most of Cooper’s 10 catches for 201 yards and 3TD’s came against him.