Editor’s note: Even though the Bills don’t have a first round pick, it’s never too early to start talking about the NFL Draft (unless you’re one of those pretenders who waits until… 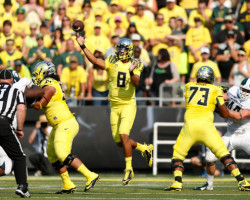 Editor’s note: Even though the Bills don’t have a first round pick, it’s never too early to start talking about the NFL Draft (unless you’re one of those pretenders who waits until the offseason when draft information is flowing and you can just take other people’s information and pass it off as your own.) Bob Gaughan is not one of those pretenders. He watches more college football anyone with a wife and two kids really should… and he’s got some thoughts.

Marcus Mariotta, Oregon-  Looks like the top performer after two weeks. Took over the game late against Michigan State and led the Ducks to victory. One lingering question will remain: The Oregon offense doesn’t require him to make throws into tight windows that you will see in the NFL.

Jameis Winston, Florida State-  Looks different this year.  It could be the stress of a more inexperienced offense or the burden of trying to win a second Heisman.

Connor Cook, Michigan State- In defeat threw for 343 yards against Oregon.  Cook is more traditional QB. He reminds some of Carson Palmer.  Keep an eye on a potential rising player.

Brett Hundley, UCLA– UCLA has played two close games against teams they should have romped. He tucks and runs ala JP Losman. What I mean is he doesn’t keep eyes down field.

Christian Hackenburg, Penn State– Has a ton of potential but still makes too many mistakes the first two weeks. Red zone interceptions have really hurt him.

Todd Gurley, Georgia– If you will take a RB in first round, it might be him. 293 all-purpose yards vs Clemson.  Just a beast.

Karlos Williams, Florida State– Averaged only 2.9 yards per carry vs Oklahoma State and went down too easy on first contact.

Ty Montgomery, Stanford– Had a good game Vs USC but he doesn’t his route running is inconsistent.

Cedric Ogbuehi, Texas A&M– Looks like A&M might have three top 10 offensive lineman in a row. Joeckel, Mathhews and now Ogbuehi. He started off the season with impressive performance in dismantling of South Carolina.

Ronnie Stanley, Notre Dame- He played right tackle last year. He’s been moved to Left Tackle and hasn’t missed a beat.  Could be a second rounder if decides to come out. Only a junior.

Cameron Erving, FSU– Got walked into backfield too much for my liking vs Oklahoma State. Could slip with more performances like that.

Washington Huskies– Defense has three studs in it: Marcus Peters, Shaq Thompson and Danny Shelton. Yet the defense gives up 52 points in a win over Eastern Washington.

Leonard Williams, USC– monster game against Stanford considering he wasn’t 100 percent. In this day and age where some players would sit out to not hurt their chances of playing on Sunday he rose to the occasion.

Mario Edwards, Florida State– Looks like a beast off the edge for the defending champs. Love his first step quickness.

Shawn Oakman, Baylor– An impressive physical specimen. His length and wing span are unmatched. He can play end or tackle. SMU couldn’t block him.

Ifo Ekpre-Olomu, Oregon– Incredible ball skills you saw by diving interception vs Michigan State. Showed why many think he’s the top corner in the draft. Size his only question only 5’10,