October is a strong contender for the best month of the sporting calendar. The NFL and MLB playoffs are in full swing and the NHL is getting rolling… so let’s talk NBA betting! The… 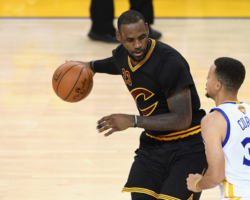 October is a strong contender for the best month of the sporting calendar.

The NFL and MLB playoffs are in full swing and the NHL is getting rolling… so let’s talk NBA betting!

The season tips off October 25th with three games including the Cavs opening their title defense at home against the Knicks. The Spurs visit the Warriors and the Jazz play at the Blazers. (Can you guess which one of these games will NOT be televised on TNT?)

A small investment in a season-long futures bet can give you months of entertainment so here’s a look at the favorites to win it all.

The Warriors had the best roster in the league… and then they added Kevin Durant. Of course they’re the favorite to win it all but where’s the fun in laying these odds when the second favorite (and defending champ) pays three-to-one? Enjoy watching this team all season long but don’t tie up your money at -135.

While no team is a lock to reach the NBA Finals, the Eastern Conference has yet to build a worthy “1A” to the top dog Cavs. Cleveland is -250 to come out of the East (yuck) so if you like the the team enough to put your money on LeBron James reaching the Finals for the seventh straight season, roll the dice on the Cavs winning it all. You can always lay off some of your risk by placing a bet on the Western Conference champ.

The departure of Tim Duncan gives the Spurs a different vibe but Gregg Popovich has been weaning this group off Duncan for awhile. LaMarcus Aldridge and Pau Gasol fill some of the void but San Antonio has quietly put its foot on the gas and upped the tempo, based largely around Kawhi Leonard. Tony Parker and Manu Ginobili have lost a step but there’s enough pep left in the backcourt to bring freshman Dejounte Murray along slowly. Popovich has reached the Finals five times and won it four. All in all, the Spurs look like a steal at +650.

Despite the addition of Al Horford, the departure of Sixth Man of the Year contender Evan Turner is tough to swallow for the Celtics. They’re a fun team and maybe worth a bet to win the division (-110) or even the conference (+550) but this roster isn’t strong enough to get through the big boys out West.

Injuries killed the Clippers postseason but with a couple breaks, this group could break through at any time. With the top pure point guard in the game Chris Paul running an offense full of scorers, there’s nice value at +1800. And with rule changes to minimize the abhorrent “hack-a” defensive strategy, games featuring Deandre Jordan may even become watchable.

Toronto resigned star forward DeMar DeRosen and extended head coach Dwane Casey but did little to improve upon a roster that wasn’t good enough in 2015-16.