What was the name of that movie? 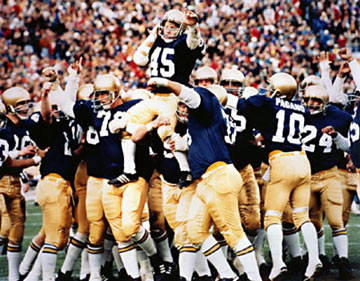 I can’t remember the title but, my favorite Disney movie is the one where the competent and respected hockey coach is fired and his team responds by playing better. It’s the touching story of a group of talented and well-paid men, coasting along through games, sick of their coach’s message, so they don’t try their best. Then, the coach is fired and the players come together and try harder.

It’s not ‘Hoosiers’, because those kids listened to their coach, learned important life lessons and won. That wouldn’t be this movie because, in this movie, the coach is fired because his players were sick of him. This is a different movie. I can’t think of the title.

Remember that scene, where the millionaire athlete needed his coach to be fired to try his best, even though he should have just gained enough motivation from pride, or having more money than any man will ever need for six generations? The title is on the tip of my tongue.

It is my favorite movie because it reminded me of when I played sports as a kid, and how my mom would always pat me on the butt as I was running onto the field and say, “Don’t try too hard if you don’t like your coach, Greg! We’ll just get him fired if you don’t like what he’s doing! Have a closed-door meeting!” It was good advice because, I had played for that coach for a long time and his message was lost on me.

I remember while watching this movie how much I was rooting for those poor players, anguishing through their games, being told what to do every day and getting nothing in return… except for the millions of dollars. I remember getting all choked up at their sad story and shouting at the television, “Fire the Coach so they don’t have to suffer!” It was a tear-jerker. I was so relieved when they fired the coach.

See, these players had also recently been through a grueling ordeal where they didn’t play hockey for half of a season because they wanted more money. I was glad for these resilient players that their coach was fired and rooted harder for them. They deserved to win.

The title is escaping me. It’s a great movie, though. It’s a lot like ‘Rudy’, except the meaning is the complete opposite. You folks should rent it.

Greg Bauch is the author of ‘Frank Dates‘ which might suck but it isn’t his fault.