I hope his Zubaz suit jacket is ready by Week One.

Attack Of The Mario Williams Falcon 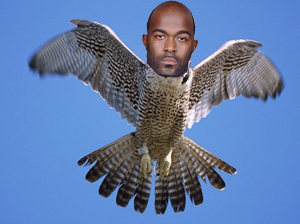 This picture makes no sense. So what?

I went to the emergency room because my right eye was in full revolt on Friday night. A good flushing and a few dozen milky eye drops later and I’m back to doing what I love, calling babies ugly and touring the Moose Lodges of Western New York. As far as I’m concerned, Mario Williams has no excuse. His foot may be wonky and his police academy degree may be bogus, but he teamed up with a peregrine falcon to inspire the hottest Mario Williams take this side of the Hudson and win the Internet last week.

WHTK caller Tim in Irondequoit thinks Mario Williams is soft, and he wanted John DiTullio to know it. “Mario’s just a headgame thing. The guy has a head problem,” Tim said about the man who had 10.5 sacks in a “bad” season. Williams, who had to deny he contemplated suicide this summer, missed a few days or training camp with a foot thingy. It’s not like he had an infected cornea or anything, so Tim and I don’t see what the big deal was.

“This guy is not the guy that I thought he was,” Tim says, “And actually Houston actually got rid of this guy OH JEEZ. I’LL TELL YOU WHAT I JUST. A PEREGRINE FALCON JUST CAME DOWN IN MY BACKYARD AND GOT A PIGEON. HE JUST NAILED A PIGEON.”

Much like the Oprah Winfrey Show, a transcript of the proceedings just doesn’t do Tim’s call justice. The next three minutes are a serious discussion about the killing power of peregrine falcons and the life and death struggles playing out in his Monroe County backyard. “That’s probably better than Mario,” Tim said, doubting the bird-snatching skills of a 28-year-old man from Richlands, North Carolina.

Tim goes on to tell the story of a falcon that flew into his house because of the last-ditch effort of a pigeon to avoid death at the hands of the fastest animal in the world.

“One day I seen a pigeon come flying into my yard. He made a quick turn and a peregrine flew right into my house and dropped to the ground,” Tim said. “He got down, shook off his head and took off and nailed the pigeon!” It’s like Top Gun in Tim’s backyard except that all the birds are straight and they suck at volleyball.

“How much can a Falcon hold?” DiTullio asks Tim later, perhaps intentionally paraphrasing Monty Python and the Holy Grail. This is the greatest Buffalo sports call in history and it’s taking place 90 minutes away. Step your game up, Queen City.

One must wonder why, on that particular day and at that particular time, the falcon made its presence known to the sports world. My working theory is that it was Jake from Animorphs taking down a pigeon with a Yeerk in its brain. This pigeon was likely on its way to St. John Fisher to slither into Doug Marrone’s ear canal and force him to tank the season. In this regard, that peregrine falcon is a first-ballot Berls Merfia hall of famer. I hope his Zubaz suit jacket is ready by Week One.

The truth is that hidden between Tim’s hot sports take and the brutal murder of a pigeon is the reality of the drama surrounding Williams over the last few months. “This guy is not the guy that I thought he was,” Tim said. And he’s right. Expectations and reality are completely different species when it comes to Mario Williams. The difference between the two makes for an interesting show but—just like in Tim’s backyard—there’s only going to be bloodshed at the end of the day.

Keep your head on a swivel out there, friends.