The Bachelor franchise is in trouble. ABC canceled ‘Bachelor Pad’. They kept bumping back tonight’s premiere of the Bachelorette. I held out faint hope that this season might be canceled… 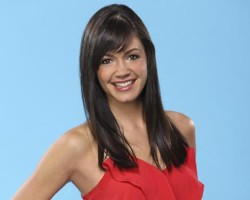 The Bachelor franchise is in trouble. ABC canceled ‘Bachelor Pad’. They kept bumping back tonight’s premiere of the Bachelorette. I held out faint hope that this season might be canceled because Americans started watching less to pay more attention to their families. Alas, America still cares more about crap than family. The Bachelorette rolls on.

ABC searched the globe for the perfect Bachelorette contestant. They wanted a woman straight out of a fairytale who will inspire everyone to find love. They picked Desiree Hartsock, last season’s 4th place finisher. 4th place Game Show finishers don’t even get the home version. Dez got her own season. She’s Dez now.

Dez is pretty, I guess. She seems nice. She’s not Ashlee H., so I don’t specifically wish her harm. Dez drives up in a car that makes clunky noises to show how down to Earth she is. Dez tells us how hard she had it growing up because her brother had to sleep in the living room. That’s pretty rough. I’ll bet all of the people in Third World countries who drink out of the same well as their entire village and have life expectancies of 16 heard about Dez’ plight and immediately mailed her some bugs and grass to eat.

Dez cries some more before we even get a chance for drama. Her parents are married so, she cries because she also wantss to be married. It’s sad.

Next, we re-live Dez getting dumped by Sean Lowe. They even show us the part where they stood in a tree and yelled ‘Hello’ to Canada. I tear up a little bit. Dez says that all she wants to do is make someone happy. She could destroy the Bachelor franchise from the inside. That would make me happy. I wish Dez would make me happy. I once had to sleep in my living room.

ABC gives Dez a fancy car and then they show her roller skating around and trying on hats. Then, she sits on the beach to think and look at seagulls. Game 6 of the NHL Western Conference Semifinals is 213 channels away.

Chris Harrison sits down to interview Dez. Chris Harrison’s shirt was engineered by NASA to be 100% wrinkle-free. You could build a house of cards on his shirt. They play up the ‘poor’ angle. Apparently, Dez lived in a Burmese prison and only ate fish heads. Harrison asks where she stands on kissing. She says, “If I wanna kiss the guy, I’m gonna kiss the guy.” Dez says, “I want a man!” Dez is a total whore. Most poor girls are, though.

ABC takes 7 minutes to show Dez get dressed and brush her hair. She can’t get through it without crying about wanting love. Make no mistake; Dez wants love. Chris Harrison tells the camera that the entire show is pulling for Dez to find love. If that were true, it would have been nice of the show to not line up 25 egotistical maniacs to date her.

As per usual, we get video bios of the favorite personalities:

Bryden is a soldier who is kind to dogs.

Will yells ‘hello’ to Chicago and does yoga. He’s the black guy.

Drew runs without a shirt and had a tough childhood. His brother also slept in the living room.

Nick R. is a magician and a virgin.

Zak doesn’t need ‘c’s in his name and has super tall hair. He drinks coffee without a shirt.

Robert invented people who spin signs and sits on benches to think while being filmed.

Mike is a dentist with big arms.

With the warm and fuzzy video bios finished, it’s time for Dez to meet her boyfriends. Some of these men are actors. Some of them hate some of them. All of them have abs. Limo gimmicks have grown progressively worse through the years and this season raises the bar.

Juan Pablo brought Dez chocolate. One guy wears a suit of armor. One guy doesn’t wear a shirt. One guy decides to be named ‘Bryden’. Nick M., who I’m told is from SUNY Geneseo, read Dez a poem. My wife liked it. I glared at her.

An Emergency room doctor asks Dez to dance and he tries to dip her. He fails in doing so. It’s slightly uncomfortable.

Two of the contestants this season have killed before. And I don’t mean that they accidentally hit people with their car on a country road. They’ve meticulously mapped out and committed several murders. There’s sure to be an epic ‘murder victim’ battle between the guy who creepily tried to dance/grope Dez and the guy who showed up in armor. They both have freezers full of woodchucks.

ABC loves to exploit children so they allowed one guy to bring his 3-year old along to make a good first impression. I wish my Dad used me for tail. I’d respect him so much more. The kid says cute things and he was probably a paid actor like half of the people on this god forsaken show.

When the limos leave, the alcohol comes out. The next 45 minutes is a mixture of awkward conversations and booze. There are no rules on the Bachelorette, so ABC throws a bunch of roses on a table and Dez can hand them out at any time. The contestants sit around and drink and decide who to hate. I decide pretty quickly to hate Kasey. Kasey works in Social media, which I didn’t think was possible. He keeps saying ‘Hash Tag’. It’s #annoying. He needs to be #punched in the #teeth. If Kasey has a single friend, I’ll eat a rented bowling shoe #worstpersonalive.

We’re just over an hour in and Dez drops a bomb. She throws out the word ‘connection’ about 3 weeks early and gives a rose to Ben, the guy who hired a child actor to be cute in front of a limo. It’s a good lesson for us all; use your children to better your situation, whether it’s wallet making or confidence games.

Because Ben got the first rose, all of the guys hate him. They sit around and talk about Ben. The music turns murdery. The murderers plan their murders.

Producers told the guy with no shirt to take off his pants and jump in the pool. Then, they told Dez to give him a rose so America can be mad at him for another week. I know I’m looking forward to hating him next week. I plan to set aside a few minutes a day to hate him.

Juan Pablo pulls Dez outside to show her how well he kicks a soccer ball. This ploy never worked for me, but Juan Pablo scores a rose. Juan Pablo is all sorts of dreamy. He’s like an Australian Russell Crowe. All of the guys come out to play soccer in suits. It’s awkward. I sweat too much to play soccer in a suit. Dez kicks a ball and the guys cheer like she just won the World Cup. I hate pandering #pandering.

During the commercial break, I see a promo for ‘Rookie Blue’. Could you imagine a police department full of ridiculously gorgeous people? I’d commit crimes on purpose. Rookie Blue, you have the right to remain stunning!

After the break, things get rapey. Jonathan lights some candles and tries to rape Dez. When she resists his invitation to a fantasy suite to have sex, he puts his hand on her back and tries to push her to the fantasy suite/ rape room. She resists again and politely tells him to leave her alone. She moves on to another contestant. Undeterred, Jonathan grabs Dez again and tries to force her to his fantasy suite. We’re pretty close to our first televised ‘Bachelor’ rape.

A bunch of roses are handed out. It all happens fast. I’m still trying to get over the fact that Dez’ brother had to sleep in the living room. Before the rose ceremony, Chris Harrison lays down the law for this season. One thing is clear, even on a show without rules, don’t rape Dez.

Dez throw roses around like Dennis Rodman threw ‘bows (sports quota filled), so the Rose Ceremony is unspectacular. It does give me a chance to hate a few of the guys for the last time.

The serial killer/ dance guy does not get a rose. The serial killer/ suit of armor guy does not get a rose. Apparently, ABC doesn’t think it would be good for ratings for Dez to be murdered in the middle of the season. I tend to disagree. She did give Social Media Kasey a rose so, there’s a chance I will get on a helicopter and fly to California to murder Kasey the 600th time he hashtags something. My hatred for Social Media Kasey could power an amusement park #hate.

Suit of armor guy regretted his wearing of the suit of armor. He blamed his choice on his belief in love. It makes a ton of sense. He just wanted to show Dez how much he believes in love so he wore a suit of armor. What is so hard to believe about any of that? Sometimes, I don’t think that Dez is here for the right reasons.

We get highlights of the upcoming season. Dez cries a bunch. She runs through orange trees with someone. Shirtless guy wears a shirt. ABC hired a really bad actress to come on the show to scream at Dez about something. Someone is found to be there for the wrong reasons. The guys shout and point and say “Boom”. It’s super dramatic, guys. You probably shouldn’t watch #superdramatic.

Greg Bauch is the author of ‘Frank Dates’ #FrankDates.