There have been nineteen seasons of ‘The Bachelor’ and tonight marks the eleventh season of ‘The Bachelorette’. That’s a dump truck full of festering dog poo. Britt Nilsson and Kaitlyn… 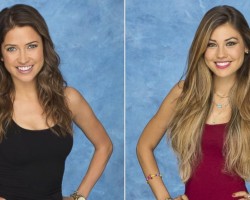 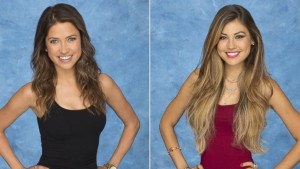 Britt Nilsson and Kaitlyn Bristowe are co-Bachelorettes. It’s never been done before. This show has no rules! None! None rules! Two Bachelorettes! Did you guys even know that you were watching history tonight? Did you even care? Did you even read this far down? I hate you guys.

In order to make a terrible thing worse, ABC has decided to make their two golden girls go up against each other one last time to win the hearts of twenty five men. I can’t believe I just typed that sentence. The twenty five guys come out of the limo, meet the girls, and then vote for which girl they would like to be the Bachelorette. It’s a good idea. I was tired of girls having all of the power in this world.

Chris Harrison is calling tonight “historic.” It is. It’s historic. Historically bad. Just like when the Washington Capitals only won 8 games in the 1974-75 NHL season. Sports quota filled.

Chris Harrison also says that they’re letting the men choose which girl is the Bachelorette to let love have a better chance of surviving. Chris Harrison cares so much about love. He’s like love’s goalie. So many sports references. Keep up!

We start with a reminder of what the two girls are like. It’s remindery. Both girls want love. It’s a good thing Chris Harrison is so good at cultivating love with his schemes. Kaitlyn is a big jokester and makes inappropriate jokes. Britt is selfish and shallow. At least, that’s the picture ABC paints. ABC is a painter. They paint.

Kaitlyn changed her hair color to keep pace with the devastating speed of this show. Britt kept the same hair color. How are you guys reading this without passing out from shock over the severity of it all? How are you still alive?

After reminding us of the stuff we’ve seen, ABC shows us a preview of the stuff they’re going to show us instead of just showing it. We meet some of the men vying for Britt/Kaitlyn.

Jonathan has a 5-year old son who he calls his partner in life. It’s a little creepy. Jonathan is on Team Britt.

Joe from Kentucky has eyes that are really close together and the exact same haircut as Bart Simpson. That’s not a compliment. Joe has a horse. He tells his horse that he wants someone to share their experiences with. It’s much creepier than calling your son your “life partner.”

Josh is a male stripper with more tattoos than Dennis Rodman. Bravo, ABC. I know, when I’m trying my best to help someone find true and eternal love, I match them up with a male stripper.

Brady is a singer/songwriter/douchebag. He says that he’s always had melodies but true love has escaped him. It’s almost impossible to hold all of my hate for him in my body. It’s like hating him is an outer-body experience. Brady likes Britt. Why are you reading this?

Ian used to run but he got hurt in an accident. The accident was fortunate because it gave ABC a chance to show him stretching on the beach with no shirt on while rubbing his leg in a creepy fashion and also running on that same beach while wearing no shirt. He also sat on a bench while wearing a fedora. This guy is the total package.

Jared is a superhero. Tony is a serial killer who kisses plants and meditates in front of cameramen. Ben Z played football and his mom died. He also likes to run around parks without a shirt on. He and Ian should get along while not wearing shirts. When Ben Z isn’t running shirtless, he stands on the shore of a pond, skips rocks, and stares off into the distance while thinking about his mom… and love.

The limos are next. Keep up! As she arrives to her mansion, Britt says, “I’m ready to meet my husband.” I just can’t believe this is all happening… for the thirtieth time. The ladies hug Chris Harrison and act like they’re not emotionally scarred by what ABC has done to them.

Kaitlyn and Britt stand apart as the men walk up to give their awkward greeting. It’s fun. I’m having so much fun, you guys. Kaitltyn hates the new Bachelorette because most of the guys are talking more to Britt than they are to her. It’s awkward. Kaitlyn cries because going on a show to date 25 men at the same time isn’t working out the way she thought it would.

Just as Kaitlyn is about to cry her little self dry, ABC switches gears and has a bunch of guys hug her first and say nice things to her so she feels special. Kaitlyn is all smiles and everyone is happy again. ABC, you wizards! The stripper guy strips and everyone totally LOLs. We’re all having a lot of fun. I really would like my television to explode.

ABC is making it a point to show the sock game of each guy stepping out of the limo. Are socks a turn on? Do women care about socks? If you like a guy, but he’s sporting tube socks, is he a non-candidate? How come you guys never answer my questions?

To make sure we reach new levels of terribleness, ABC plants a fake bad contestant guy to drink a lot and act terrible. He yells inappropriate things because that’s what a terrible fake bad guy would do; they’d go over the top in their badness. When you act like a drunk guy on ‘The Bachelorette’, can you put it on your resume? Does ABC make you stay on the down low for a couple of years before you admit that you’re an actor? Will this fake drunk guy go on to play an abusive husband in a Lifetime Movie Channel movie? I hope so, for his sake. 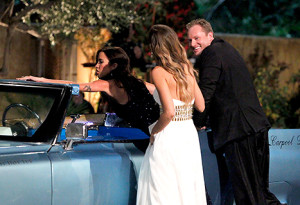 How can you securely fasten your seat belt in a hot tub car?

Creepy plant-kissing guy comes out of the limo with a black eye to make himself look creepier. It’s creepy. Some guy named Shawn drives up in a car full of water. It’s a hot tub car. The fake drunk guy yells at the hot tub car guy and tells him he sucks. It’s such a coincidence that ABC allows a contestant to stand outside and yell at other contestants to stir up trouble. I can’t spend a lot of time thinking about this because another guy just drove up in a cupcake car. It’s a car that’s a cupcake. I hate this show. Also, keep up!

The intros are over and the girls come inside to mingle and get voted off their own show. There’s a bunch of talking. We hear it. It happens. It’s a weird premier because it’s normally guys falling over themselves to impress one girl, but the girls have to impress too so everyone is emotionally charged and annoying.

Half of the girls like Kaitlyn and half of the guys like Britt. It’s almost like ABC strategized and planned this whole thing. That can’t be the case because ABC is only interested in people finding love.

The psycho, black eye, plant-kissing guy has a deep conversation with Britt that makes me shiver. This guy stores woodchucks in his freezer, for sure. Britt likes him, which tells you a lot about Britt.

One of the guys drew a picture of Chris Harrison holding a rose on a Triceratops and it actually made me happy to see it. It’s the first time this show has ever made me happy. I would pay one thousand dollars to buy that picture and hang it in my work cubicle.

Right when we’ve reached the peak of fun, Chris Harrison walks in to spoil things. The men are instructed to vote for the woman they want. We live in such a terrific democracy. Woodchuck guy touches the vote boxes and Britt’s box tells him to vote for Britt. That really happened. I hope it’s the same way this guy votes for the President.

The girls are forced to petition for votes instead of spending time to get to know their future husband. Everyone is a nervous wreck. You guys are nervous too, admit it.

One of the guys asks Kaitlyn about her bird tattoo and it makes Kaitlyn happy because it’s the only bird that always flies home. I don’t understand it either.

JJ says that Britt is the prettiest girl he’s ever met. He says, “She’s a 15 out of 10.” So, JJ gave us a predetermined scale of beauty and then couldn’t stay within that scale for his own judgment. JJ is terrible at math.

To add fake drama, Shawn the hot tub car guy pulls fake drunk guy aside to yell at him for the thing that happened two hours ago. It’s… not really dramatic because it’s staged and didn’t really happen. Shawn and drunk guy almost fight. They don’t fight though. They do that thing where guys yell about fighting while walking away. I hate this show.

Drunk guy does more drunk guy stuff. He’s earning his money. Drunk guy takes off his clothes and goes in the pool. For a guy who hates hot tub cars, he certainly likes pools. The rest of the guys say that drunk guy is here for the wrong reasons. I have to agree with him. He’s not here for the right reasons. One of the black guys says that drunk guy is “white guy drunk”. I didn’t know white guy drunk was a thing?

Chris Harrison has one of the Bachelorette bouncers bring drunk guy outside so he can kick him off of the show. The bouncer guy does a great job. I’m going to find him on LinkedIn and endorse him for bouncing.

Chris Harrison gives the group a speech about drunk guy being kicked off for being here for the wrong reasons. You can’t come on a show where 25 guys vote for the girl they’ll date along with the 24 other guys on television and be drunk. You just can’t. Thank you for reading down this far.

Singer/songwriter/douche Brady says that Britt is a billion out of ten. Ten divided by a billion is .00000001. Wow. He must really hate Britt.

Chris Harrison comes out to announce that he’s tallying the vote. It’s super dramatic. Instead of showing us the results, ABC shows us a four-minute preview of their new stupid trivia game show. The host is British so he must be really smart.

To help tally the votes, Chris Harrison recruits his Bachelorette bouncer guy. This bouncer is climbing the ladder to stardom. Thanks to that four-minute game show teaser, we have to wait until tomorrow night to find out who will be the next Bachelorette. So, we all get to do this again in 24 hours. I hate this show.