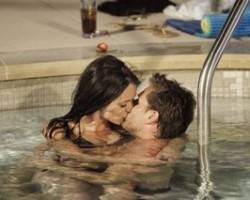 Bachelorette Recap- You Have No Idea How Bad This Show is

Dez (she’s Dez now) has her search for love narrowed down to 13 guys. I’m nervous… not because I don’t think Dez will find true love. She’ll find true love, no doubt. I’m nervous because the Bachelorette website tells us that it’s ‘Smooch Week’. ‘Smooch Week’ sounds like a terrible idea. I fully expect ‘Smooch Week’ to be 100% less exciting than ‘Shark Week’. Will we see footage of men jumping out of the water in super slo-mo to maul Dez? No. We’re going to see smooching. My esophagus already burns from bile. It’s ‘Smooch Week’. It’s the Bachelorette.

Last week on the Bachelorette, some guy named Brandon cried over being dumped by a woman he had known for 28 minutes. This woman was also dating a dozen other men. This season is reaching new horizons of suck. We will find that this episode carries that torch. (Sports quote kinda filled)

Chris Harrison wears a shirt that looks like a ‘color blind’ test and gathers his 13 friends to go over the episode format. There will be a pair of 1-on-1 dates and a group date. Harrison says, “You are obviously the 13 guys that Dez sees a future with.” It’s a profound statement.

I realize early that the hashtag guy is still around. His name is Kasey. He just hasn’t said the word ‘hashtag’ since week one. It’s a huge #upset.

Brad gets the first 1-on-1 date. The rest of Dez’s boyfriends congratulate Brad and pat him on the back because they’re happy that their friend gets to go out with their girlfriend.

Dez and James walk around a place similar to Atlantic City and have fun. It’s nuts how much fun they have. They ride rides and laugh. Before I realize it, I’m laughing too. This date is a ton of fun.

Some Bachelorette intern is forced to build a giant, intricate sand castle for Brad and Dez to cuddle in. Brad talks about his son and how he wants a good mom for his son. He’s so concerned with this desire that he went on National Television to find a good Mom who would also date 20 other men.

The sand castle date is boring. It’s an awkward, quiet cuddle fest. They’re not making out and Dez is all about the tonsil hockey. This was supposed to be ‘Smooch Week’. It is clear Brad is going home. My wife says, “He’s going home”.

Brad tries to start a conversation. Dez laughs and releases her jaw to gulp a gallon-sized glass of wine. She kills her anxiety with alcohol. Dez and I have a lot in common. Brad isn’t good with the talking. It makes for excellent television.

Dez makes Brad climb a bunch of stairs to dump him on top of a lighthouse. Brad thanks Dez for dumping him. I feel bad for his kid, watching this at home. Dad is boring, unless sweets are involved because, you have no idea.

Brad cries during his goodbye to ABC cameras. I can make fun of this but I have never gone through what Brad is going through. I have no idea.

The group date is next. Dez takes her boyfriends to a street or something. Brooks says,“She’s like a unicorn. She shows up every once in a while for 10 seconds… and usually with another guy”.

They go into a building. You have no idea. Chris Harrison walks up with one of the Miss Americas. They talk about the history of the Miss America contest. I learn. ABC is tired of Dodgeball so they have the contestants run through a Bachelorette Mr. America pageant. I cough up more bile.

The guys are tasked with learning a talent and answering pageant interview questions. It’s super goofy. You have no idea.

There are 3 judges; Dez, a Miss America, and the mayor of a city that resembles Atlantic City.

The Miss America asks Kasey the hashtag guy, “In a relationship, are you a giver or a taker?” Kasey does not say what America expects him to say. #doesntmakeasexualreference.

Mikey strips his clothes off four seconds after complaining how he’s seen as an object. The rest of Dez’s boyfriends clap and cheer for Mikey because he showed their girlfriend his ripped torso. Three more guys make stripping their talent. Zac W. rips off the Black Crowes and turns a classic song into a Bachelorette song. No one in the audience shoots him. It’s unbelievable. You have no idea.

The swimsuit competition is next. There are a lot of bulges. Game 3 of the Stanley Cup finals is on a different channel. My wife yells, “God that guy’s ripped” twice. I take a mental note to drink more beer because I’ve lost that battle.

When the fun of the pageant is over, the group gets back to the important task of hating Ben. Dez brings her boyfriends to a cocktail party to make out with most of them.

Chris pulls Dez aside to tell her how he goes to coffee shops to write poetry. It’s pointless to write poetry unless people can see you writing poetry. Dez loves Chris’s poetry. You have no idea.

Ben talks to Dez and the other guys gather to be mad at him. The rest of the guys bond over their hatred for one of the guys dating their girlfriend. My computer doesn’t think that the last sentence is a sentence and I’m too tired to argue. Ben doesn’t mind that he’s hated. He’s all about Dez.

Zac W. tells the camera that he’s falling in love with Dez. It’s about time. Zac W. sings Dez another song and gets a rose. Then, everyone takes their clothes off to jump in the pool. This episode is an Algebra class on codeine.

Back at the luxurious Atlantic City hotel room, James takes a bubble bath because….

For his 1-on-1 date, James and Dez meet a lady from the Red Cross. The three of them fly over the parts of New Jersey devastated by Hurricane Sandy. Other Bachelorette contestants got to go to Spain.

They sit in A HELICOPTER and marvel over the destruction. It’s a bit of a 180 from guys in banana hammocks tap dancing. I’m disappointed James and Dez do not make out at all during their helicopter tour. James, at the very least, talks about how seeing the aftermath of the terrible storm has brought them closer together.

The Red Cross lady takes Dez and James over to meet a nice old couple named Manny and Janet who lost their home to Hurricane Sandy. They describe the night the storm hit and what has become of their home. It’s pretty bad. They have to sleep in the living room now.

What the hell is the matter with ABC? This isn’t PBS! It’s the frickin’ Bachelorette. How dare they? I want sweaty abs. I want building scaling. I want fake girlfriends fighting with fake boyfriends. I don’t want real life. I hate the Bachelorette. It was all a big ploy just to get people to donate to the Red Cross… which… is probably a good thing.

Because Sandy ruined their 38th anniversary, Dez and James donate their date to Manny and Janet and they cry and Dez and James cry and my wife cries and I have allergies that are totally messing with my eyes like crazy.

Dez and James eat fast food and talk about how much fun being poor would be. James makes out with her and then tells her about the time he cheated on his college girlfriend. James promises that he would never cheat again so, everything is cool. He says that a man can’t love until he’s cheated on a girl. He does. He really says that. He says that you need to cheat on a girl in order to understand love. I heard it with my ears.

I can’t believe Psy sold out and did a pistachios commercial. I thought he was a true artist, above commercialization.

We’re back from the commercial break and Manny and Janet are still talking and looking at pictures. I’m sick of them. Dez and James join them at the table. Manny gives marital advice to a woman dating 13 men on National Television.

Not content with depressing Hurricane Sandy footage, ABC gives Manny and Janet a private Hootie concert. Hootie has a new album or something and no Red Cross is going to get in the way of the promotion of terrible music. Hootie sings and Manny and Janet dance. I would rather watch a street paver slowly run over a litter of blind puppies.

When you’re sure you’ve suffered enough, Hootie sings a second song while Dez and James make out. There’s some televised tongue. It’s unfair how bad this show is.

The cocktail party is next. Dez is excited to spend time with her 12 boyfriends. Michael writes letters down on paper to spell out Desiree. Michael is unaware that she’s Dez now. Then, they make out. A guy named Chris makes out with Dez 12 seconds after Michael does. Dez is looking for a love that is a light in the darkness.

Bryden is thinking about leaving the show because he has to share his girlfriend with a dozen other men. What a loser. Dez tries to talk Bryden out of it, despite his name being Bryden. Before Bryden can leave, Chris Harrison clinks his fork on his champagne glass to signify the beginning of the rose ceremony.

Dez thanks all of her boyfriends for being here. Then, she dumps the other Zac; the one who wears a shirt most of the time. She offered Bryden a rose and he hesitated like he wasn’t going to accept it. It was a total Bachelorette pump fake. I lol’d.

Other Zac is shocked that he is sent home. I don’t remember him saying a single word this entire season so, I’m less than shocked. Zac manages to cry to cap a perfect evening of television.

Next week, the Dez and her boyfriends visit Turkey to witness people blasted with tear gas and fire hoses… wait, I’m sorry. They’re going to Munich, Germany. It’s a dramatic episode. There’s drama. One of the guys says, “Today is Armageddon”. So, we have that to look forward to.

Greg Bauch is the author of ‘Frank Dates’ and survived ‘Smooch Week’, barely.