There’s so much hate in the world and it’s a terrible thing. All of that hate is getting in the way and overshadowing my hatred of this season of ‘The… 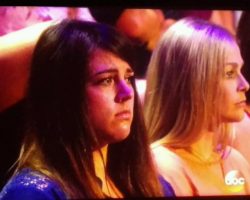 There’s so much hate in the world and it’s a terrible thing. All of that hate is getting in the way and overshadowing my hatred of this season of ‘The Bachelorette’. There isn’t enough room for other hate.

Next week, JoJo Fletcher will get engaged for a couple of weeks. She’ll choose between Aaron Rodger’s little brother and Robby. Tonight, all of the boyfriends she has dumped along the way will get one last chance to be on TV, so they’ll be even more annoying than usual to make sure that America will remember them. We won’t, but that won’t stop them.

ABC begins the episode by playing up the whole “Chad is the worst person ever” angle. I’m so sick of this angle. It’s not even a good angle. The entire two hours will probably be devoted to this stupid plot line. The men will not even have time to tell all! What are we going to do if we don’t hear all? I need all. I don’t know all. How come they never tell all?!

Because this stupid show is two hours long, ABC begins by spending seven minutes previewing what we’re about to see instead of just showing us. Next, we see a preview of ‘Bachelor in Paradise’, the “sexiest, craziest show of the summer” according the Chris Harrison. Chris Harrison must not watch the Wendy Williams show, because that’s not even a contest.

Next, the show we’re watching actually begins. Chris Harrison introduces the bros to rowdy applause from the cat owners in the studio audience. These cat owners are super excited. How much are tickets to ‘The Men Tell All’? Do you get your money back if only some is told? Answer me!

The cat owners go especially crazy for Luke because he’s dreamy and will be the next (super boring) Bachelor, probably. Chad isn’t brought out right away for national security reasons. So many people would be murdered, so they’re keeping Chad in a trailer. It’s for our protection. ABC cares a lot about us.

Next, we see more recap footage because ABC scheduled a 2-hour show but didn’t plan content. We do get to see audience reaction of the super funny moments as ABC puts a little window in the corner of the screen. The cat owners totally LOL at the funny moments. You guys LOL’d too, admit it.

The bros all say mean things about Chad, setting up the threat of a huge fist fight later that won’t happen. Alex also made some enemies this season and a guy I don’t recognize yells at him for being a mean person. The bros work it out while Chris Harrison nods. Chris Harrison can nod with the best of them. It’s his strongest quality. Alex defends himself with a lot of words. There’s a ton of talking. Alex is telling all, that’s for sure.

After yelling all at once about Alex, the bros shift gears to talk about Chad. They’re all obsessed with Chad. They’re Chadsessed. They have a Chadsession. There’s so much talking.

Following the talk about Chad, ABC brings out Chad. Keep up! To make sure I’m as angry as I can possibly be, they have a fake security guy escort Chad from his trailer to the stage. Chad mumbles about how he’s going to fight Alex. ABC plays menacing music. Everyone is about to die. It was nice knowing you guys. Sorry about everything. You can have all of my stuff.

Chad comes out and sits next to Chris Harrison. How is he going to murder everyone from up there? ABC plays the Chad footage we’ve already seen four times. It happens. We watch it. Again. It’s still stupid, no matter how many times we watch it. We’re 27 minutes into the show and nothing has happened yet.

The cat owners applaud the Chad footage. America loves Chad. Chris Harrison asks Chad if he wanted to punch someone. Chad says that he should have punched someone. I wish someone punched me.

Graham brings up the fact that Chad is dating Graham and Robby’s ex-girlfriends. Chad likes both of the girls. While he’s talking, one of the guys I don’t know takes off his jacket and walks down to confront Chad. It’s confronty. He offers to fight Chad. This is super real. There’s going to be a fight. It’s not orchestrated at all. You can tell it’s real because ABC interrupts the fight with a commercial break. As you all know, when two guys are ready to actually fight, they can easily be interrupted for a commercial break and then resume their fight after the commercial. Predictably, Chad and the other guy don’t fight. That guy took off his jacket for nothing. The cat owners in the audience still look concerned.

There’s more talking. There is just so much talking. All is being told. The bros talk about how awful Chad was in the house. It’s hard to follow because no one is really saying anything, AND they’re constantly interrupted. It’s like two 4-year olds on stage, trying to tell separate jokes at the same time. I hate this show.

Chad tells Chris Harrison that Aaron Rodger’s little brother is only on the show for media attention. So, to be clear, the guy acting like a jerk on TV for attention is degrading another guy looking for attention. Of course he’s on TV to try and be on TV more. That’s why everyone goes on TV! No one ever goes on TV to say, “Please stop putting me on TV!” Chad also says that Robby has threatened his ex-girlfriend not to talk to Chad or tell stories about their relationship. That’s at least almost interesting.

Chris Harrison asks Chad why he punched a wall. Finally! We’re hearing all. Chad says that he punched the wall because it was better than swearing. Muskrat eyebrows responds to the punch question. I can’t understand what he’s saying because I can only concentrate on his eyebrows. They’re magnificent. Those eyebrows should be in the Smithsonian. I think he hired a specific stylist who only does eyebrows.

After eyebrows, there’s more talking. The bros continue to yell at Chad. Chris Harrison asks Chad about his deceased mother. Chad says that his mother would have loved to watch him on the Bachelorette. I’m sure, if she went to hell, she’s watching. That’s where I am. I wonder if Claire’s dad knows Chad’s mom. They’d be a power couple.

This recap is terrible.

Chad leaves. Chris Harrison brings Luke up to the hot seat to say nothing. The cat owners go crazy because Luke is a super hot cowboy. We watch more footage we’ve already seen so we can be reminded of how boring Luke is. This episode is all recap footage. I’m basically recapping a recap. ABC seriously shows a solid 5 minutes of Luke and JoJo footage. It’s their entire relationship. Luke had the same expression on his face the entire time. Even when he’s dumped. He constantly looks like he’s solving a hard match problem. I mean, to be fair, maybe he is. Maybe Luke got a hard math problem in 4th grade and he has spent his entire life trying to solve it in his head? I’ve been too hard on Luke.

After the footage, Luke talks about how he’s still in love with JoJo and how he just wants her to be happy. This is the kind of talk you hear from a guy who will soon be named as the next Bachelor. That season is going to suck so much. I already hate it and it hasn’t even happened yet. Luke says that JoJo’s love has opened his heart and now he’ll be able to love again. That sounds dangerous. You can’t just go walking around with an open heart.

Chase is next on the hot seat. It’s probably super hot because Luke was just sitting in it. Before Chase can tell all, we watch a bunch of footage because ABC is still out of ideas. We watch Chase’s heartbreak. Chase watches his own heartbreak. When you watch your own heartbreak, does your heart break again? Can you get double heartbreak? Does a broken heart grow stronger, or is it like an ACL tear that you have problems with for the rest of your life? You guys didn’t even read down this far.

Chase still doesn’t understand why JoJo gave him the Fantasy Suite card and then dumped him. Chase wants to hear all. He also says that he doesn’t regret telling JoJo that he loves her. I regret him telling her that because I had to watch JoJo blow snot out of her nose for 20 straight minutes after she dumped him.

Chris Harrison brings out the Bachelorette, JoJo. Cat owners love them some JoJo. That studio is louder than a Seahawks game, and just as much artificial sound is being added to the broadcast.

JoJo says that she had never broken up with someone until she became the Bachelorette, and it was tough for her. That’s her fault. She should have practiced at home before coming on the show. 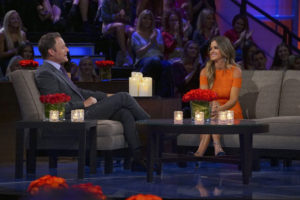 Nothing is happening here.

Chase gets to ask JoJo why she dumped him right after giving him the Fantasy Suite sex invitation. They even let him come up on stage to do so. It’s a weirdly edited moment because the audience started applauding then was silent, and Chase was suddenly sitting up there. Nice job, ABC.

JoJo isn’t sure why she dumped Chase. She would have slept with him, but didn’t love him. I guess it’s true what they say, (takes off sunglasses) the chase is preferred to the taste. I’m really sorry about all of that.

Chase tells JoJo not to feel guilty about dumping him. He says that he learned a lot and then thanks JoJo for dumping him. I always thank the girls who dump me, for sure.

James Taylor also gets a chance to talk to JoJo. He says super nice things because he wants to be the next Bachelor too. Chad wants to talk. He talks. We listen. Chad repeats the things he said before about the two remaining contestants. JoJo doesn’t respond. She says that Chad only talks because he wants attention and isn’t worth her breath. He was certainly worth her breath when they made out for six straight minutes. Boom! Roasted!

There’s no more all left to be told, but the episode rolls on. Alex tells JoJo that he didn’t deserve to be dumped, but he respects JoJo’s decision. You guys respected JoJo’s decision too, admit it!

At some point, Vinny’s mom jumps up in the audience and tells JoJo that she should have picked her son to win the game show. It’s a super spontaneous, unscripted moment, even though Vinny’s mom is fully mic’d and is able to interrupt the broadcast flawlessly. Vinny’s mom has a spark and an annoying voice, so she’ll probably get her own reality TV show.

Next, we get bloopers!!!!!! They’re super bloopery! The bloopers are so funny that I break my rib from laughing. It was worth it.

The show ends with a 5-minute preview of next week’s finale, because why start using new content now? JoJo will choose between Aaron Rodger’s little brother and Robby. The finale will be 3 hours long. Nothing should be 3 hours long. I wouldn’t want to do something I enjoy for