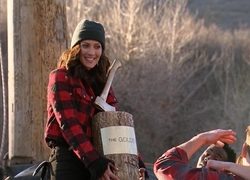 Love Is Not About Golden Underpants

Like disease, ‘The Bachelorette’ is still happening. Just because you’re not watching it, ‘The Bachelorette’ is annoying people around the world. It’s never going to end. I’ve given up any hope that ABC will cancel it or an asteroid will hit the Bachelorette mansion. The only thing I can do is watch it and make fun of it so you have something to look at while you use the toilet.

We pick things up where they left off, in the middle of something stupid. Becca has yet to dump any of her boyfriends. It’s the cocktail party before the rose ceremony dumpings.

Becca and Blake are talking. Blake asks Becca how many kids she wants to have. Then, they go through the names they’d give their hypothetical kids. ABC plays soft “Becca and Blake name the kids they’ll never have” music. You know your televised relationship is going good when the girl you’ve talked to for a day is going through kids’ names with you.

Becca gives Jordan some underwear. Keep up. After that, Jordan says means things about David and his broken face. Jordan is glad that David fell out of his bed last week and broke his face. In an amazing twist of events, David arrives to the mansion with his broken face in time for the cocktail party. Becca is so impressed, she gives him a rose. Let this be a lesson to you kids at home; always break your face.

The other boyfriends all hug and congratulate their friend David who is dating their girlfriend. As he’s leaving the mansion, David says goodbye to Jordan. Jordan calls David’s saying of goodbye as a personal attack. Let this be a lesson to you kids at home; never say goodbye to anyone.

Becca dumps some more of her boyfriends. It may have just been one. Some guy named Joe? I have no idea. It doesn’t matter. You didn’t even read down this far. Jordan got a rose because he’s been planted by producers to be annoying and get “ratings”. This show has no ratings, by the way. I’m the only person watching it.

The group of lovers flies to Utah. Keep up! Utah is the perfect place to find love because of the snow and Mormons. Cameras capture Becca walking down a flight of stairs in Utah. You know she’s in Utah because of all the Utahness in the background. Becca just jumped on her hotel room bed to think more about love. Cameras captured this. We’re so lucky to be seeing this.

Becca is excited about her 1-on-1 date with Garret. I don’t think I’ve ever noticed Garret before, but Becca seems to really like him. I guess he got the first impression rose. I must have drowned that out.

On this date there will be shopping and sight seeing. Becca and Garret try on hats and shoes. We watch them do this because we’re being punished. You think they’d be exhausted from the hat trying on, but they find the energy to also eat jelly. This is all happening too fast. I barely processed the hat trying on and they’re already jumping to jelly. Whew!

Back at the mansion, things are getting interesting. We’ve just discovered that Lincoln is a flat earther. This is so much more thrilling than anything Becca and her boyfriends will ever do. Lincoln says that he’s certain the earth is flat because, when he’s on an airplane, the land below him doesn’t curve. Now I want Lincoln to never go home. I want to hear more lunatic flat earther talk. I’m obsessed with it.

Blake loved his bobsled date. He says, “I’m on cloud 10.” He totally jumped to top level cloud-dome. He doesn’t play around with cloud 9 bullshit. This guy’s on CLOUD 10!

Blake and Becca make out in the snow. No one cares because we’re no longer watching someone talk about how they think the earth is flat. Just one minute of the show was devoted to flat earth theory. It’s such a tease.

The Earth is Round

Update: Former ‘We Bros Accept This Rose’ podcast co-host Shaun Murphy cares so much about ‘The Bachelorette’ that he thought I should know more about flat earther Lincoln. Apparently, Lincoln was found guilty of sexual assault for groping a woman on a cruise ship and is now a registered sex offender. Imagine a scenario where being a flat earther was only the 2nd worst thing about you.

The 1-on-1 date continues, like a eulogy. Becca and Blake talk a little more about failed marriages and then they make out. Becca gives Blake a rose and they go to a concert featuring country music artist Granger Smith. I’m sorry, that’s the worst name ever. Granger Smith sounds like a name that a computer would generate if you fed it country music lyrics. Anyway, they make out in front of Granger Smith and his fans. It’s romantical.

The group date is next. Becca takes a shitload of her boyfriends to the woods, or something. There will be lumberjacking. Sports quota filled. Becca wants to get to know her potential future spouse by being nowhere near him while he cuts wood. It’s a sure-fire way to find love. Whenever I want to know if I love someone, I give them an ax and have them stand nowhere near me.

After they cut wood, there is a bunch of axe throwing and log throwing. This is not Lumberjacking, ABC! Lumberjacks respect their axes! At least Becca is falling in love.

A Lumberjack competition follows. I thought that was already happening, but I was wrong. The guys change into plaid shirts so we can see their abs. There is more log rolling and wood cutting. It’s way less interesting than I’m making it sound. John won the Lumberjack Contest. He gets eternal life, or something.

The after party is next. I’m worried there will be zero flat earth talk. Becca drinks alcohol with her boyfriends. Jason the guy from Buffalo who reaches at least the top 3, gets alone time with Becca. He uses the alone time to suck on the back of her mouth with his mouth. The slurping is loud. Becca likes Jason.

Colton gets alone time. He still hasn’t told Becca he’s a virgin. He makes out with her, so she would have no idea of his virginness.

Jordan takes off his pants to show off his gold underwear. The other boyfriends are dismayed at his underpants show. They flat out tell the camera that Jordan is here for the wrong reasons. He is, you guys. The right reason is to find love. The wrong reason is to walk around in gold underpants. How can I be any clearer?

Colton takes Jordan outside to tell him he’s being a clown. Jordan gets real upset but I can’t tell you what he says because ABC bleeps it out. I’d like to think that he was talking about flat earth theories. We will never know.

Jean Blanc hasn’t progressed with Becca. He’s been shy about kissing her. When he gets alone time, he gives her perfume, then moves in for a super awkward kiss. Becca doesn’t take the kiss well. It’s not a place a man ever wants to be. When you kiss a girl, you never want her to start talking before the kiss is over. Becca talked before Jean Blanc is done kissing her. It’s a terrible thing to watch.

Jean Blanc didn’t get enough embarrassment because he doubles down on the awkwardness. He takes Becca aside again and tells her that he’s falling in love with her. She doesn’t say anything. I miss how awkward the kiss was. Becca tells him his love isn’t welcome. She calls it “intense.” Becca puts Jean Blanc out of his misery and dumps him. Let this be a lesson to you kids at home, never love anyone. I’m sure Jean Blanc is going to love watching this back.

Holy shit, Jean Blanc isn’t done. As Becca is walking him out, he asks about the perfume he gave her. She says she liked it. He kind of asks for it back. Jean Blanc says that the only reason he said he loved her is because he thought she wanted to hear it. Now even I’m confused. Jean Blanc has dug a hole big enough to fit a shopping mall. Becca completes her dumping by putting Jean Blanc into a limo.

Becca walks back to her boyfriends to complain about Jean Blanc. They all nod. It’s noddy. Becca tells her boyfriends that all she wants is honesty. She tells the guys that, if they can’t be honest, they should go home. Becca leaves. It’s super leavey. She left the shit out of this date.

Wills walks through the snow to pick Becca up for their date. They both agree to put the Jean Blanc situation aside and concentrate on their date. They’re so laser-focused on their date, you guys. There’s no distracting them. Don’t even try it. You could slap a wasps’ nest and through it at Becca’s face and she wouldn’t even flinch because she’s so focused on her date with Wills. Go ahead, try it!

Wills and Becca jump on snowmobiles to ride around Utah. It’s so much fun, I don’t even remember the whole situation thing. I can’t even remember his name. I’m drawing a Jean Blanc. That was really funny. You guys are jerks for not laughing.

So, this date sucks ass. They ride their snowmobiles to a place where Bachelorette interns have started a fire. Then, they talk about relationships. No one mentions whether or not the earth is flat. Who cares about anything else?

There’s more talking on this date than an hour of C-Span programming. Basically, Becca likes Wills and they make out a ton. Wills gets a rose. No one remembers the Jean Blanc situation. No one mentions a single flat earth theory.

It’s the next day. Keep up. Chris Harrison drops a bomb on the boyfriends. There will be no cocktail party. Becca knows who she wants to dump, so they’re going straight to the rose ceremony. Just before it starts, ABC shows us the moon again, so you know shit’s 100.

Becca addresses her boyfriends. The Jean Blanc situation reminded her of times in the past when she was hurt, so she asks her dozen or so boyfriends not to hurt her. Seconds later, she dumps two of them.

Flat earther and sexual assaulter Lincoln gets a rose. I have mixed emotions. On one hand, he’s a scumbag, on another hand, he might talk about why he thinks the earth is flat. I guess it’s not up to me, it’s up to Becca and the producers who tell her who she’s allowed to keep and who she can dump. Jordan gets another rose so we can enjoy the terrible fake drama of the Jordan show for another week. Villains gotta vil.

Two guys I’ve never seen before get sent home, Nick and Christon. They handle it with class. I mean, as much class as you can have appearing on a reality game show where a husband is chosen.

David and his broken face get to stay, but he’s upset because he doesn’t like Jordan. You guys don’t like Jordan either, admit it. Jordan is focused on winning the game show. He tells the camera, “This could be the moment I go from Captain Underpants to Captain Take Everyone’s Girl.” I don’t think that’s an official title in the Navy. It doesn’t matter. The show is over. Stop reading.